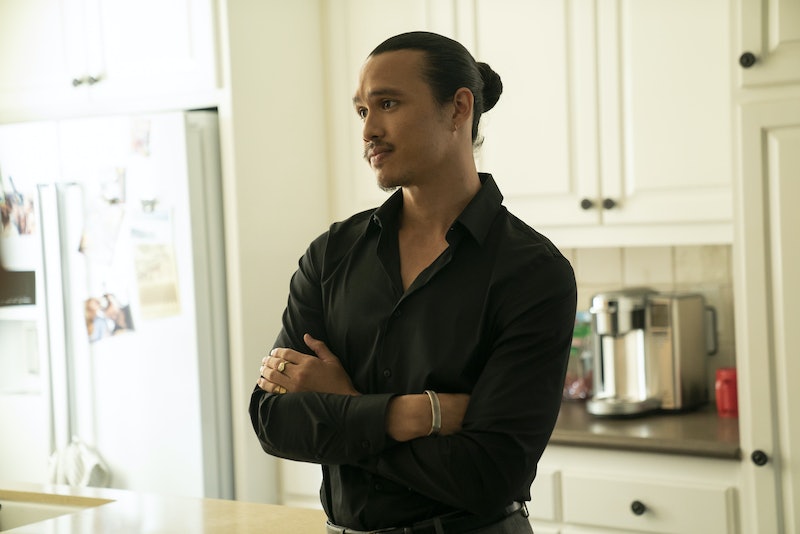 Insecure's Molly has had no luck with love, from her fizzled out romance with Jared to her ill-advised relationship with married man Dro. Now Molly has a new beau on Insecure: Andrew, played by Chinese-Australian actor Alexander Hodge and dubbed "Asian Bae." Andrew is confident, honest, and he may be the one for Molly — if they can overcome some early relationship bumps, that is.

Andrew was first introduced in Season 3 as Nathan's friend, and he seemed to be offering everything Molly would want in a boyfriend. Their relationship hit the rocks by the second date though, with Molly storming out after a small quip about Dro turned into a full-blown argument. (And to be fair, Andrew can be a little too honest at times.) Molly's first apology was similarly botched, and it wasn't until the Season 3 finale that Molly came clean to Andrew. She finally admitted to him that she doesn't always "assume the best in people," and she had been lashing out at others because she didn't realize how much her relationship with Dro hurt her.

"Molly is not well-versed in getting read," Yvonne Orji, who plays Molly, told Entertainment Tonight in 2018. It's only after Molly was honest about her feelings to Andrew that he dropped his cold-shoulder act and told Molly, "I'm here." "I do believe that Andrew could be the one to peel back the layers and allow Molly to be free," Orji concluded to ET.

Ultimately, that early miscommunication helped Molly grow, but it seems like she'll still have to work on feeling secure in her relationship with Andrew in Season 4 — a hard thing to do on a show literally titled Insecure. "It's all good sex and witty banter, but —" Molly says in the Season 4 trailer, to which Issa immediately demands to know what the problem is, "'cause I don't hear it."

As for Hodge, he's aware of how remarkable it is that Andrew is Molly's new calm and collected love interest, and that Asian Bae may very well be The One. “I think it’s so important to see a confident, outspoken, man bun-sporting Asian man on screen saying, ‘I want what I want.’ We haven’t had that before,” Hodge told HuffPost in 2018.

Per GQ, Hodge grew up in Sydney and became an actor at 21 after a knee injury ended his rugby career. He played bit parts on Modern Family and Law & Order: SVU before landing the role of Andrew on Insecure. According to Hodge, Andrew isn't as perfect as he seems though, and he still has just as much growing to do as Molly does.

"Andrew's a very confident dude, he’s always calm and collected and never really flustered or overly vulnerable," Hodge told GQ. "But he also has a hard time opening up about himself. He doesn’t like to be made to feel uncomfortable like that."

As Hodge hints to GQ, Season 4 will be about exploring how Andrew supports an "incredibly driven, independent, professional woman" like Molly, while also being attuned to their needs as a couple. Hodge said that Andrew and Molly are "two people who challenge each other’s existing boundaries when it comes to dating," which can only mean we'll see Season 4 Molly really come to terms with what she wants and what's best for her. Whether that means being with Andrew or not remains to be seen.