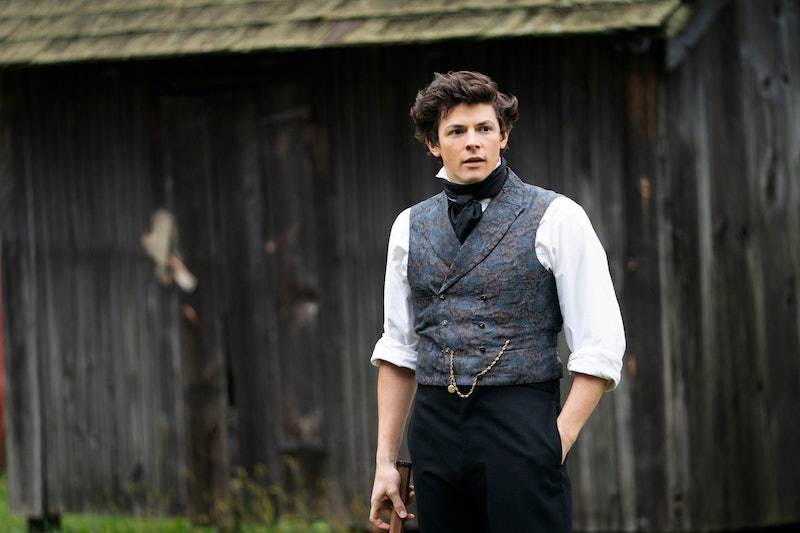 One of the most highly anticipated Apple TV+ series launching on Nov. 1 is a half hour sitcom chronicling the young life of the clever, daring, inspiring poet Emily Dickinson. Her brother Austin on Dickinson? Not quite as inspiring, but only because "he's dealing with his fragile, white, straight male ego," as the actor who plays Austin, Adrian Blake Enscoe, told The Knockturnal. He added, "Austin's heart is in the right place…I think. Even when he's doing sh*tty stuff."

As the male heir, Austin is the Dickinson family's great hope. His Apple TV+ bio describes the character as "tall, handsome, dutiful, the ideal of a strapping young eligible man." In the 19th century, where this series takes place, he was everything he was supposed to be — but Emily doesn't settle for being glossed over by her family or the world at large. Her desire to be a great writer and her own person supersedes her family's desire to be respectable. And while her brother "admires" her, he doesn't understand Emily, and he especially doesn't understand why her best friend Sue gives Emily more attention than Sue, his fiancé, gives him.

Austin's character bio says "he is not willing to share" Sue's love, which is his biggest point of contention with his sister Emily. Sue's bio says she loves Emily but is only "sporadically hot" for Austin. And although Austin was raised to believe was the most important and was handed everything, Emily will hand him nothing. So while Dickinson is a period comedy, it also has a modern sensibility that fans will definitely want to root for. In the trailer alone, Emily sticks out her tongue and mock gags at something, debutantes dance dirt, and she throws up the "rock on" hand sign.

Enscoe did promise The Knockturnal that there will be some horse-riding scenes with his character, which actually helped him get into the 19th century mindset. "I took a bunch of horseback riding lessons and that's a great way to get into the period," Enscoe said. "It's like the most analog that there is." He also said he took badminton classes and that he really enjoyed stepping into those old-timey costumes. "Getting into the period costumes is a great way to kind of delve into the character because it's a different structure and a different way of thinking about masculinity, about your place in the world — it's like aspirational," he gushed.

This is one of Enscoe's first major roles. He previously had one-episode parts on shows like Orange is the New Black and Girls and a small role in a horror film called Seeds, but Austin in Dickinson is a big jump for him. And since the series has already been renewed for a second season, per The Hollywood Reporter, Enscoe can count on his role continuing to expand (unless he gets killed off in Season 1 for some reason).

And while he's still sort of an acting newbie, Enscoe is a real pro in another area of his life — music. He's in a band called Bandits on the Run whose members describe themselves on Instagram as "flower children of the digital age." Enscoe performs under his alter ego Roy Dodger and his band bio says he simultaneously sings and plays a guitar, a suitcase kick drum, and a foot tambourine during the band's performances. Maybe Austin will get a musical number one of these days in Dickinson — if he can ever stop fighting over Sue with his sister, of course.

More like this
The 'Freeridge' Cast Shared Their Hopes For A Potential Season 2
By Grace Wehniainen
You Might Want To Rewatch This Key 'On My Block' Scene To Understand 'Freeridge'
By Grace Wehniainen
A 'Terminal List' Sequel & Spinoff Are Reportedly In The Works
By Kadin Burnett and Grace Wehniainen
This 'One Tree Hill' Wardrobe Error Is Going Viral On TikTok
By Brad Witter
Get Even More From Bustle — Sign Up For The Newsletter
From hair trends to relationship advice, our daily newsletter has everything you need to sound like a person who’s on TikTok, even if you aren’t.