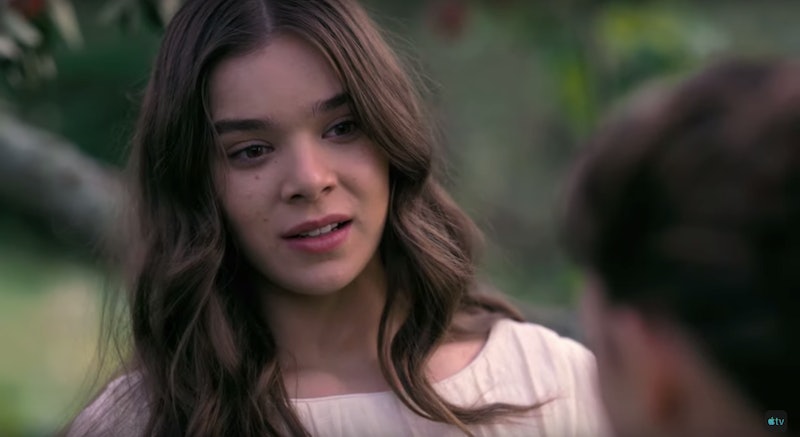 A teaser trailer for Dickinson on Apple TV+ just hit the internet today, and it's going to make you want to dust off your old American poetry collections. The new TV series about Emily Dickinson transforms the notoriously awkward and socially anxious poet into a rebellious heroine for millennials. Set for a fall debut on Apple TV+, Dickinson is sure to excite many book-lovers.

Born in Amherst, Massachusetts on Dec. 10, 1830, Emily Dickinson published very little poetry in her lifetime. She lived an isolated existence, though she wrote many letters, maintained friendships across long-distances, and read widely. Following her death from kidney disease in 1886, her sister Lavinia Dickinson discovered the bulk of the poet's work, and published the first collection of her sister's poetry in 1890. In 1955, The Complete Poems of Emily Dickinson collected the author's verse in a single volume for the first time.

Dickinson's brief and often melancholy poems have resonated with readers for nearly 130 years. Now, Apple TV+ will bring the poet's coming-of-age story to the streaming platform as Dickinson.

"I have one purpose," Steinfeld's Emily Dickinson says in the Monday teaser trailer, "and that is to become a great writer." Steinfeld's Dickinson later notes that "we're definitely going to have a war," seemingly referencing her parents' objections to her unladylike "antics."

This is the third Apple Original series teased for Apple TV+, following the Jennifer Aniston and Reese Witherspoon-led The Morning Show, and the alt-history drama For All Mankind, which stars Joel Kinnaman. Another book-based drama, Truth Be Told, is set to premiere on Apple TV+, as is the game-studio comedy Mythic Quest. As announced in March, Oprah Winfrey will launch two new docuseries — Toxic Labor and an as-yet-untitled second series — on the streaming service.

The Apple TV+ streaming service will be available this fall to subscribers using the Apple TV app. In the meantime, you might as well brush up on your knowledge of Emily Dickinson's poems.

More like this
50 Books To Read With Your Book Club
By K.W. Colyard
10 Must-Read New Books Out This Week
By K.W. Colyard
Dr. Anna Pou Is Still Practicing Medicine After Facing Murder Charges
By Brad Witter
This New TV Show Revisits The Most Controversial True Story From Hurricane Katrina
By Brad Witter
Get Even More From Bustle — Sign Up For The Newsletter