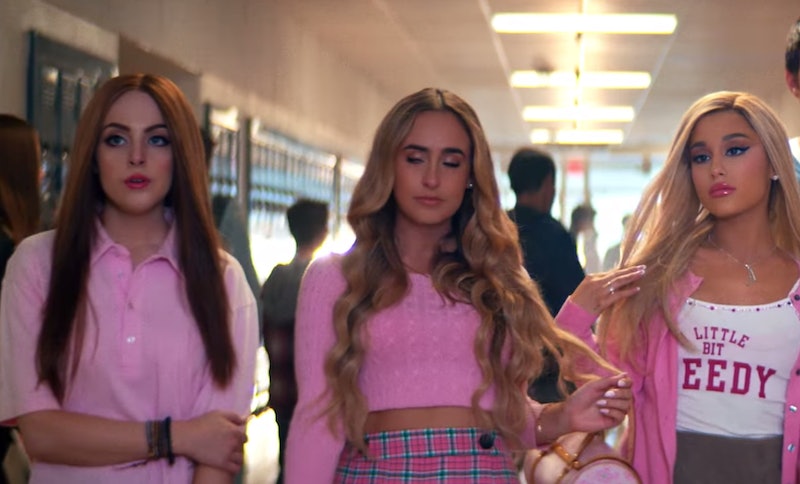 While Lindsay Lohan herself doesn't show up in Ariana Grande's "Thank U, Next" video, the actor who plays Cady looks almost exactly like the movie's original star. For the music video, Grande cast Dynasty star Elizabeth Gillies. On the CW show, Gillies is best known for playing a mean girl of a different kind — the often bratty and definitely spoiled energy company heiress Fallon Carrington.

But Grande and Gillies actually go way back to another TV show, which is likely how Gillies landed her role as Cady in the Mean Girls-inspired "Thank U, Next" video. According to E! News, Gillies used to star alongside Grande in Victorious — Grande's former Nickelodeon show. Gillies played Jade West, the main character Tori's frequent nemesis.

In "Thank U, Next," Grande peppered the video with references to several classic 2000s films, including many nods to Mean Girls. She even managed to cast the original Aaron Samuels, actor Jonathan Bennett. But the Plastics are formed from an entirely new batch of actors, with Grande playing Regina George and Gillies portraying Lohan's classic role of Cady Heron. The Dynasty star is basically the next best thing to actually casting Lohan, because they look pretty much identical. Can you even tell the difference?

However, Lohan had a different response when she found out there would be a new Cady in town. According to Entertainment Weekly, Lohan has long expressed a desire to reprise that role herself. EW reported that Lohan told Wendy Williams during an appearance on her show that she is constantly asking Saturday Night Live's Lorne Michaels — a producer on the film — to produce a sequel. "It's becoming a bit stalker-ish" Lohan joked, adding, "I think they’re really focused on the Broadway show right now."

Technically there already is a Mean Girls 2, but it went direct-to-video and didn't involve the original cast or writers. But even if the world can't have an official Mean Girls sequel, "Thank U, Next" sort of serves as a fun dip back into that world. And although Lohan didn't get to play Cady, she posted on Instagram that she's not too bummed by who Grande chose instead.

"Ain’t nobody Lindsay Lohan like the real Lindsay Lohan," the actor captioned a selfie. "But so flattered by @arianagrande loving #MeanGirls so much! Also, I love #dynasty."

Basically, if someone has to play your beloved character, it's nice when it's at least someone from a show you already like.

And Gillies did such a good job playing Cady that she even fooled some fans.

"Omg I thought Liz was [sic] Lindsey," one Instagram commenter posted on Grande's photo of the new Plastics.

"Wait is that Lindsay Lohan in the Thank U, Next video or just a look alike?????!" asked a Twitter user. "Oh wait!!!!? That's not Lindsay Lohan!!!? Hahahah damn fooled me," said another.

And even the fans who weren't outright fooled were just impressed by how well Gillies embodied Lohan in the video.

Perhaps the plot of a Mean Girls sequel can be that there are two of each of the Plastics. They can get the original cast to team up with the Grande versions. Potential title: 2 Mean Girls 2 Furious. Someone call Lohan.