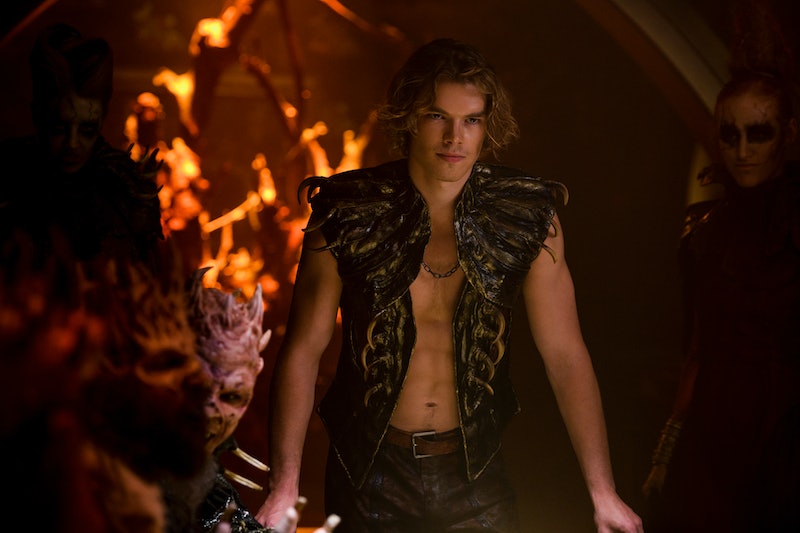 Light spoilers ahead for Chilling Adventures of Sabrina Part 3. Few people can go toe-to-toe with Sabrina Spellman, but in Chilling Adventures of Sabrina Part 3, the young witch meets her match in Caliban, played by Sam Corlett. He's introduced in Episode 1 as the Prince of Hell, who's "molded from the clay of the pit itself, native son of the inferno, born to restore and rule [their] dark domain," which are all just a lot of fancy words that mean he's determined to be King of Hell. When Sabrina, the Dark Lord's heir apparent, crowns herself the underworld's new ruler, Caliban challenges her title, leading to an extended face-off — and some sexual tension that could get between Nick and Sabrina.

To prepare for the role, Corlett says that he turned to art. "I was going through a bit of a Doors phase, so I was welcoming Jim Morrison's energy and a bit of Michael Hutchence from INXS," he recalls. "And then I was reading a lot about hell, and there was a particular line from Dante's Inferno that inspired me."

Corlett is an Australian actor from Central Coast, New South Wales, per his IMDb bio. He studied at the Western Australia Academy of Performing Arts, graduating in 2018. Although playing Caliban marks his first big onscreen role, Corlett will appear in an upcoming movie called The Dry, which is based on a 2016 novel from Australian author Jane Harper. This film stars Eric Bana but doesn't yet have a release date.

In addition to his interest in acting, Corlett is also an artist and often posts his abstract illustrations to Instagram, alongside artsy polaroids of his fellow CAOS castmembers, various landscape pics, and the occasional glamour shot. Based on his most recent photos, he's a good person to follow if you're looking for behind-the-scenes Part 3 shots.

More like this
Nicola Coughlan Shared A Lady Whistledown Excerpt From ‘Bridgerton’ Season 3
By Grace Wehniainen, Alyssa Lapid and Sam Ramsden
On 'The Handmaid’s Tale,' Christine Ko Fights Back
By Gretchen Smail
The 'Andor' Timeline, Explained
By Gretchen Smail
Alicent's Green Dress In 'House Of The Dragon' May Be An Act Of War
By Kadin Burnett
Get Even More From Bustle — Sign Up For The Newsletter