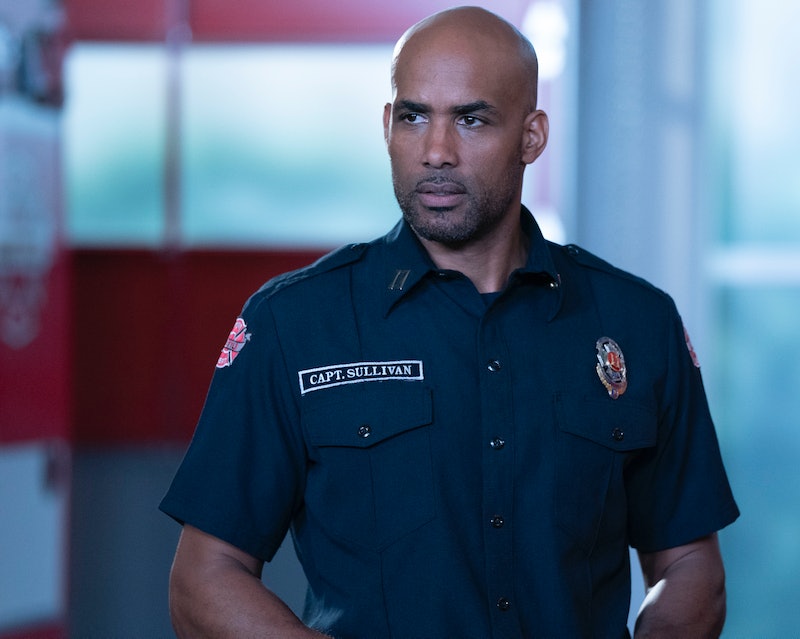 Station 19 takes place in Seattle and so does Grey's Anatomy, so the two Shondaland shows are always doing crossovers with each other. On May 2, Robert Sullivan's Station 19 crew will be on Grey's Anatomy after one of the firefighters needs medical treatment. If you haven't been keeping up simultaneously with both shows, it may help you to know who plays Captain Sullivan on Station 19 since he's kind of a big deal character.

Boris Kodjoe came onto the show to play the new Station 19 captain after Andy's dad had to step down due to health issues. Kodjoe has since been promoted to a series regular, and his character is definitely sticking around. (For now. But the writers do keep putting him in life threatening situations, so who knows about the long term.) Captain Sullivan rubbed some of the firefighters the wrong way when he first succeeded the role. Andy's dad was beloved by all, and Sullivan had a gruff nature and strict rules.

But, as with most Shondaland shows, a disastrous event usually bonds opposite characters together — and that's what happened for Andy and Sullivan. During the Seattle windstorm (which also played out on Grey's Anatomy), Andy and Sullivan nearly died in an accident together. They ultimately both survived, and it brought them closer together. The accident did severely injure Sullivan, though. It took him several months of rehab and walking with a cane before he was back at work. Viewers will see him in action in the two-hour Grey's/Station 19 crossover event on May 2.

Outside of Station 19, you may know Kodjoe from his role as congressman Brett Cole on House of Cards, Dr. Will Campbell on Code Black, Phil Stacy Miller on The Last Man On Earth, or Luther in the Resident Evil series. Or, perhaps you know both him and his wife Nicole Ari Parker from the Showtime drama Soul Food.

According to Essence, the pair met on the set of that show and have been married since 2005. They have two children together and couldn't look more in love. For their 13th wedding anniversary last year, Essence reported that Kodjoe posted 13 reasons why he loved Parker on Instagram. He wrote:

"[There are] 13 ways I have been loving you.. ..as a man ..as a friend ..as the father of your children ..as a fan of your craft ..as an artist to his muse ..as a partner ..as a world traveling companion ..as an admirer of your beauty ..as a supporter of your dreams ..as a confidant ..as a guardian of your trust ..as your secret place of comfort ..and as a dancer with your heart and soul."

Kodjoe will also be recognizable in an upcoming role. He's playing O.J. Simpson in the film Nicole and O.J. According to People, it was originally due out in March 2019, but it seems to have been delayed now to 2020. You can click that hyperlink to see a photo of Kodjoe in his Simpson costume.

But, for now, Kodjoe is focusing on playing Captain Robert Sullivan, a firefighter who is finally bonding with his team of everyday heroes.