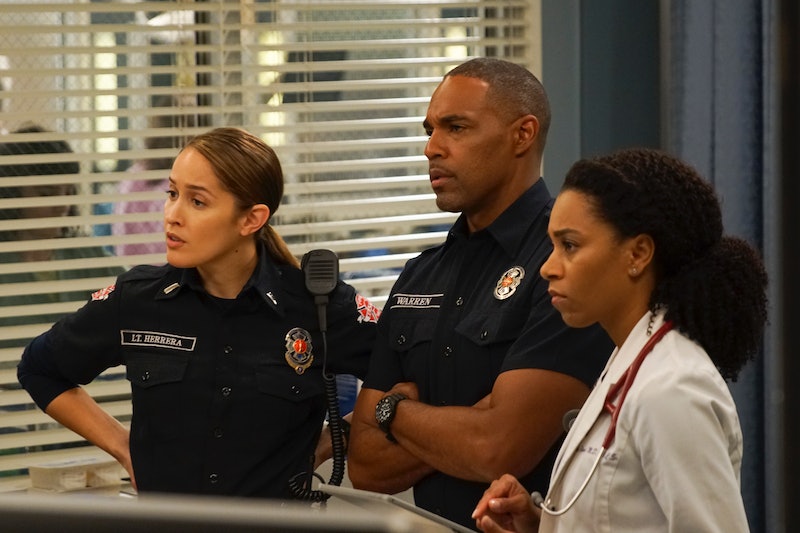 Grey Sloan Memorial Hospital is about to get a little more crowded. Specifically, with some local firefighters. Next month fans will get to see a Grey's Anatomy and Station 19 crossover that also happens to be a bit of a mystery. Why? Well, because Shondaland knows how to do drama right, of course.

The two-hour event, airing May 2, starts with the Grey's episode "What I Did For Love," in which Maggie (Kelly McCreary) will treat someone from Station 19, while Meredith, working with a family seeking asylum, "makes a call that could jeopardize her career," according to the episode's synopsis. As of now, ABC is keeping the identity of this fire fighter a secret. But, their press site includes a photo featuring Maggie, along with Station 19's Lt. Andrea "Andy" Herrera (Jaina Lee Ortiz) and Dr. Ben Warren (Jason George). So, we can at least count them out for now, which phew, because we don't want to see Miranda hurt. Not now.

As for why the men and women from Station 19 are in the hospital, well, fans will get to see that in the second hour of this TGIT lineup. Station 19's "Always Ready" will look at the aftermath of a "deadly blaze at a coffee shop that landed one of their own in the hospital," according to the ABC synopsis. It also makes it clear, that the as of now unknown fire fighter at Grey Sloan Memorial is "looking at an uncertain future due to life-threatening injuries." So yes, this one's gonna get serious and possibly very sad. By now, though, Grey's Anatomy fans know to keep tissues close.

This is the second Grey's/ Station 19's crossover following the 2018 two-hour episode that also included an unforgettable Maggie moment. As you might remember, Maggie was awkwardly hit on by Station 19's Dean (Okieriete Onaodowan), who prides himself on being a ladies man. Well, maybe you wish you could forget it now since his advances fell flat when she literally laughed in his face. "I had a fiancé named Dean once," she said.

What you really can't forget, though, is how that original crossover – Grey's “Momma Knows Best" and Station 19 "Under The Surface" – centered on one kid who is struggling with the news that his mom might not survive. But, it ends up showing both the doctors and the fire fighters what their little ones mean to them. No surprise, it was a tearjerker.

It was also a very popular episode. It's why during last year's ATX Television Festival, George teased that there will be more crossovers to come. “I feel like we’ve barely scratched the surface of Grey’s world interacting with the Station 19 world and vice versa," he said then, "that’s just getting started.”

Just don't expect Station 19 to ever just be Grey's lite. “It was really important that this show worked as a companion piece with Grey’s," Station 19's Stacy McKee said at last year's ATX Festival. "But also had a very distinct voice."

So, it may be one crossover that you'll see next month, but two different episodes from two different shows. To find out what happens on those show, well, you're gonna have to tune in. Oh, and don't forget the Kleenex.