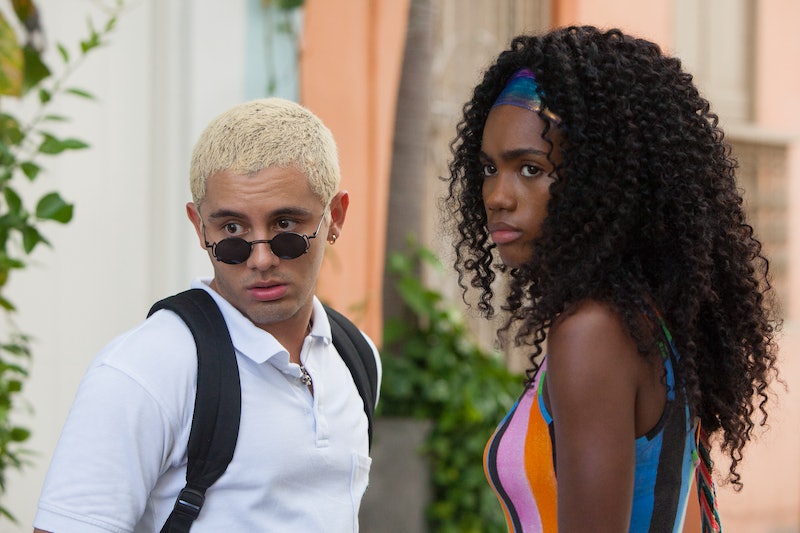 Something witchy this way comes, following in the footsteps of shows like Charmed and The Chilling Adventures of Sabrina. Siempre Bruja (or, Always a Witch in translation) is a Colombian Netflix series following Carmen (Angely Gaviria) — a girl who seems seriously out of place in the coastal town of Cartagena. But Carmen has a secret: she's a witch and has time-traveled to the present. Angely Gaviria plays Carmen in Siempre Bruja, who is an up-and-comer in the Colombia entertainment scene, and she was essentially made for this role.

As for the Siempre Bruja plot, it's clear that Carmen has no idea how modern life works, asking what apps are and apologizing for not having any gold on her. "Did you come from the mountains?" someone asks her, incredulous. But of course, there's a reason for this. She's from the past. According to a press release from Netflix, the show was inspired by the Isidora Chacon novel, Yo, Bruja. Dago García serves as executive producer, Ana Maria Parra wrote the script, and the series was produced by Caracol Television, per the same statement.

The press release also helps elucidate some of the important plot points: Carmen is a 19-year-old from the 17th Century. And not only is she both a slave and a witch, but she's traveled through time to escape being burned at the stake. What's more, audiences learn that she's also trying to save someone named Cristobal, whom audiences see in a flashback. Then there's a mysterious person named Lucien, who seems to be out for blood. "You must be very careful," a yet-unidentified character warns Carmen. "Lucien smells witches' power from a distance. He'll turn you into ashes, as he's done with many of us."

The series also stars Sofia Bernal Araujo, Valeria Emiliani, Dylan Fuentes, and Carlos Quintero, among others. "Our second Colombian original Siempre Bruja is not only a magnetic young adult story that audiences will love, but also holds a powerful message of empowerment that will connect deeply with members both in Colombia and globally," Erik Barmack, Vice President of International Originals, told Netflix in the same statement.

As for Gaviria herself, this is one of the young actor's few onscreen performances — her first was in the Colombian apocalyptic drama 2091, which aired from 2016-2017. Gaviria was also in the show Pambelé, although it's not credited on her IMDb, which she posted about on her Instagram and personal website. The series followed the life of famous Colombian boxer, Antonio Cervantes, whose nickname was Kid Pambelé, per the site Entretengo.

As for her background, Gaviria was born in Cartagena, Colombia, in August 1996, per her website. While she was growing up, her bio continues, she helped her parents at their ceviche stand, which they had in the touristy part of town. Even more impressive, Gaviria won the Señorita Afrodescendiente (or Miss Afrodescendant) contest when she was 16 — a Colombian beauty contest which celebrates Afro-Latino culture, according to the organization's website.

Gaviria held the Señorita Afrodescendiente title from 2013 to 2014, per an interview she did with the magazine Q'hubo. During that time, the actor was interviewed for articles and attended events, similar to duties that a Miss Teen USA would perform during her tenure.

Afterward, Gaviria attended the University of Bogotá, where she studied acting, modeling, and dance, per her site. So although the actor is used to being on camera, her role in Siempre Bruja is almost certainly her biggest to date. "I just want to say, if you can, fight for what you want and when you have it, love it and do not let it go," Gaviria wrote in a translated version of an Instagram post, regarding her role in the Netflix series. "Thanks to all the people who were part of this dream, I just want to tell you that this does not end here."

And although it's unclear what the actor's plans are after the series is over (unless there's a Season 2, that is), Siempre Bruja likely won't be the last time audiences see Angely Gaviria. In fact, it seems like she's just getting started.