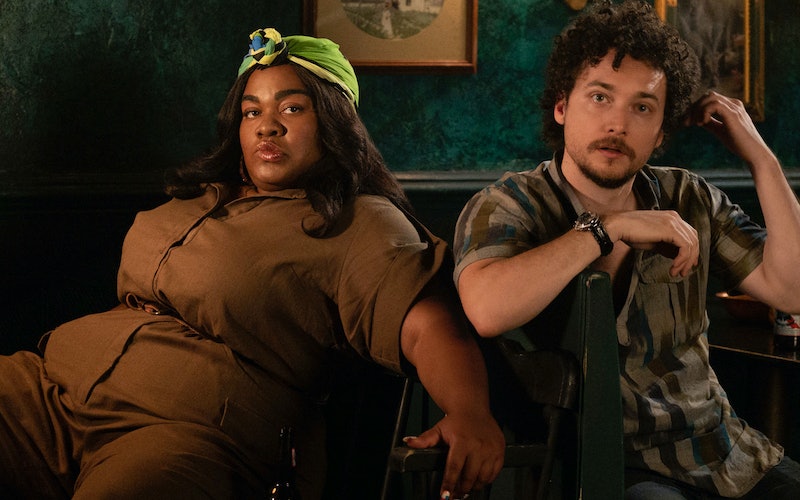 Da'Vine Joy Randolph may play the scene-stealing Cherise in Hulu's High Fidelity adaptation, but you've definitely seen her somewhere before. Her most high-profile role was as Lady Reed in Netflix's 2019 comedy Dolemite Is My Name, and she's also appeared in Office Christmas Party, On Becoming a God in Central Florida, This Is Us, and Empire. If you're a Broadway buff, you may have even seen her as Mae Brown in Ghost the Musical, for which she landed a Tony nomination.

Because Cherice is an aspiring musician, High Fidelity allows Randolph to take her musical prowess from stage to screen. But that's not the only thing that attracted her to the role.

"I think it's super dope and cool that we went from having [a movie] that was for two white men to be [about] two black women," Randolph told Vanity Fair of the show. She added in an interview with Multichannel that she also appreciates that "the [High Fidelity] characters are not stereotypes," but instead complex, multi-faceted people. "It wasn't about colorism; I hope people see that it never shows up, and that's huge," Randolph said.

If you're only just discovering Randolph through High Fidelity (hi, you're a little late), here's what else you need to know.

Ruth Carter Is Her Hero

After winning an Oscar for her work on Black Panther, Ruth Carter brought her costume design expertise to Dolemite, and Randolph was thrilled. "When I first met her I cried. Because I knew that as a curvy girl ... [I was going to be ] taken care of, and even sought after and desired," Randolph told Refinery 29. "We're just starting to get on this plus-size wagon. It's like a 'love the skin you're in mentality,' which is amazing. But I think there's still a part two where you can be equally seen as sexy. Not just like, 'Oh, for a curvy girl, you're cute.'"

She Used to Sing Opera

Though Randolph began singing at a young age, she told Who What Wear that she had a hard time pursuing music. "I knew I had a gift, but I can't say my gift was always constantly fostered," she said. "From my parents it was, but from my teachers and stuff like that it wasn't — I mean, I was kicked out of opera school. Yes, I knew I had talent, but I did not coast in this world."

Considering Randolph attended Yale's School of Drama, she still did pretty well for herself.

In a video for Netflix's Strong Black Lead vertical, Randolph shared five of the black, female celebrities whose careers she looked up to: Cicely Tyson, Hazel Scott, Esther Rolle, Sister Rosetta Tharpe, and singer and Touched By an Angel star Della Reese (who Randolph described as "the diva of the ball").

Randolph Wants to Be in An Action Film

Though Randolph is next set to appear in Lee Daniels' Billie Holiday biopic The United States vs. Billie Holiday, she'd also like to play an action hero. "For me, an action movie — a genuine action movie that is not comical or commenting on the actor's size but where she is really kicking butt as a curvy girl — is so cool," Randolph told Who What Wear. "I want to make history. I'm trying to use this exposure for good."

More like this
'Bachelor' Star Cassie Randolph’s Sister Is In The 'Yellowstone' Spinoff '1923'
By Grace Wehniainen
Here’s Everything Coming To & Leaving Netflix In February
By Jake Viswanath
Pamela Anderson’s Dating & Marriage History Could Be Its Own TV Series
By Jake Viswanath
'The Queen’s Gambit' Season 2 Tweet Wasn’t From Anya Taylor-Joy
By Mary Kate McGrath, Jack Irvin and Grace Wehniainen
Get Even More From Bustle — Sign Up For The Newsletter
From hair trends to relationship advice, our daily newsletter has everything you need to sound like a person who’s on TikTok, even if you aren’t.