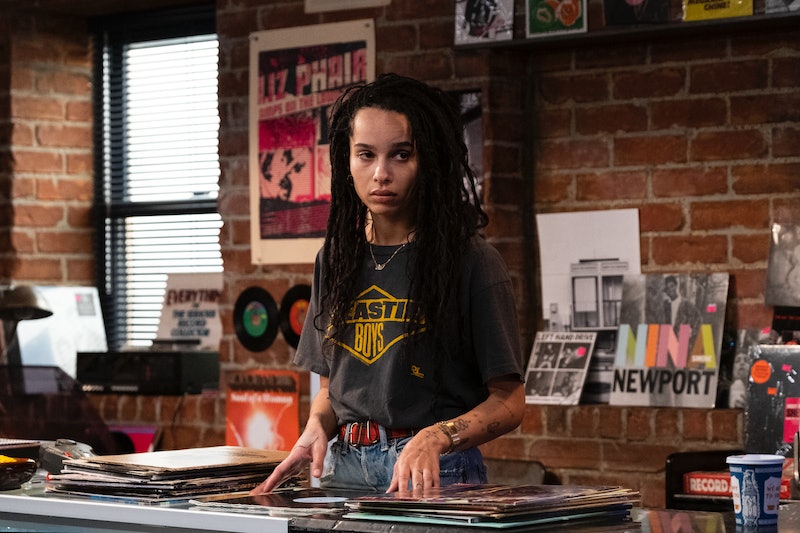 The top five reasons to watch Hulu's High Fidelity is here. These new High Fidelity photos offer a first look at Zoë Kravitz as the new Rob, a Brooklyn record store owner who knows a thing or two about heartbreak. The series, which starts streaming in its entirety on Feb. 14, is a gender swapped update of Nick Hornby's 1995 novel of the same name and the movie starring John Cusack. (Fun fact: the 2000 film also featured Kravitz's mom Lisa Bonet.)

“We, of course, had to modernize the world,” Kravitz told Entertainment Weekly. “Now we are dealing with people who are not only obsessed with pop culture, but also nostalgia." However, she said, "Changing the character from male to female did not change the kind of person we are dealing with.”

Like the movie, the 10-episode rom-dram has Kravitz's Rob navigating the world through the music she loves. This isn't easy when some of her favorite songs remind her of the one who got away. High Fidelity picks up with Rob being dumped by one of the greatest loves of her life right before he moves away to London. But just as she decides to get back out in the dating world, she's hit with a bombshell that leaves her more confused then ever.

Written by Veronica West & Sarah Kucserka, who previously worked together on Hart of Dixie and Ugly Betty, the series has Kravitz's Rob showing off her music knowledge. A rant about Fleetwood Mac in the pilot will make you happy to have Kravitz, who is an executive producer, explain music to you and the rest of the High Fidelity cast.

On the show, Rob's besties and co-workers are Cherise (Dolemite Is My Name's Da’Vine Joy Randolph), an opinionated music lover who is a big fan of "Come On Eileen," and Simon (Mindhunter's David H. Holmes), a former boyfriend of Rob's until he came out. Kravitz told EW that he is "really the most grounded character in the show."

Fosse/Verdon's Jake Lacy plays Clyde, the nice guy who Rob starts dating to try and get over her broken heart. But, is this recent New York transplant via L.A. the one who will finally be able to mend it? Too early to tell, but this shot of him and Rob out together during the daytime hours should give fans some hope, right?

Well, that is until you see this flashback photo of Rob's former boyfriend played by Kingsley Ben-Adir. Let's be honest, it's completely understandable why Rob would name him one of her top five heartbreaks. Honestly, it's hard not to get heartbroken just looking at this photo.

But, at least, anyone who's heartbroken can spend this upcoming Valentine's Day living vicariously through Rob. And whether Kravitz's new show has a happy ending or not, it's sure to have a killer soundtrack, which should be good enough for the lovelorn.