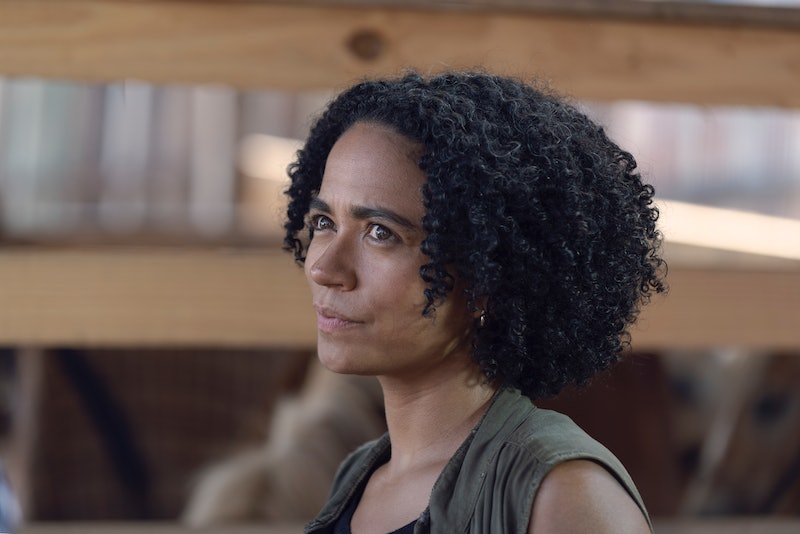 The Walking Dead may be on its ninth season, but the apocalypse drama is still introducing interesting new survivors. Magna’s group is the latest addition to the Hilltop community this year and fans immediately fell in love with Connie, a deaf survivor who used to be an investigative journalist. She’s an expert tracker, skilled planner, slingshot wielder, and a virtually fearless fighter for justice – a.k.a. the type of person Rick would be proud to have around. But Connie and Daryl’s recent adventures has the fandom shipping this duo hard as they thirst for more #Donnie action. So it might be time to get to know who plays Connie on The Walking Dead because we're hopefully seeing a lot more of her.

Per The New York Times, Lauren Ridloff (born Lauren Teruel) grew up in Chicago with a Mexican-American father and African-American mother who discovered that she was deaf at age 2. Her parents learned sign language and sent her to a regular school until age 13 when she started attending the Model Secondary School for the Deaf, where she was a competitive cheerleader and dabbled in some school plays. Later, Lauren attended California State University, Northridge and earned a degree in English and Creative Writing and was also crowned Miss Deaf America from 2000-2002. Then, she moved to New York and married her husband Douglas Ridloff, a deaf artist, with whom she has two children who are also deaf.

Prior to The Walking Dead, Lauren starred in the 2017 Broadway production of Children of a Lesser God as Sarah Norman, per CBS Sunday Morning. The play revolves around a deaf cleaning woman at a school who falls in love with a teacher. Ridloff revealed to CBS that she decided to stop using her voice as a child in favor of communicating solely via sign language after attending a summer camp. “I realized I could speak without thinking so much about how to say what I had to say and when I got back home, I told my family,” said Ridloff. “In a sense, I came out to my family. I said “I’m not going to use my voice anymore.” and my family accepted that and accepted who I was.”

The profile also revealed that Ridloff is a former kindergarten teacher turned stay-at-home mom with no theater experience before her big Broadway break. A friend recommended her to Children of a Lesser God director Kenny Leon as a resource to help him learn about deaf culture. He encouraged her to meet with the casting director and she scored the leading role opposite Joshua Jackson that changed her life, which surprised her because she assumed they would cast a White actress. Her performance gained critical acclaim and Lauren gained a Tony Awards nomination for Best Performance by an Actress in a Leading Role in a Play. So, it’s obvious why The Walking Dead wanted her to play a powerful and groundbreaking character like Connie.

Lauren further captured the hearts of fans on Talking Dead by approving the Donnie shipping name and joking about how Daryl will be alright as long as he follows Connie’s lead. Of course, she was coy about if Donnie will actually become canon and how she will play into the brewing war.

Hopefully, Connie will follow the same path as her comic book character and survive the Whisperer war. She’s still alive in the comics and Daryl is not going anywhere on the TV series, so perhaps they can form a long-lasting love that stands the test of time. Follow Connie’s incredible journey on The Walking Dead on Sundays at 10 p.m. ET.