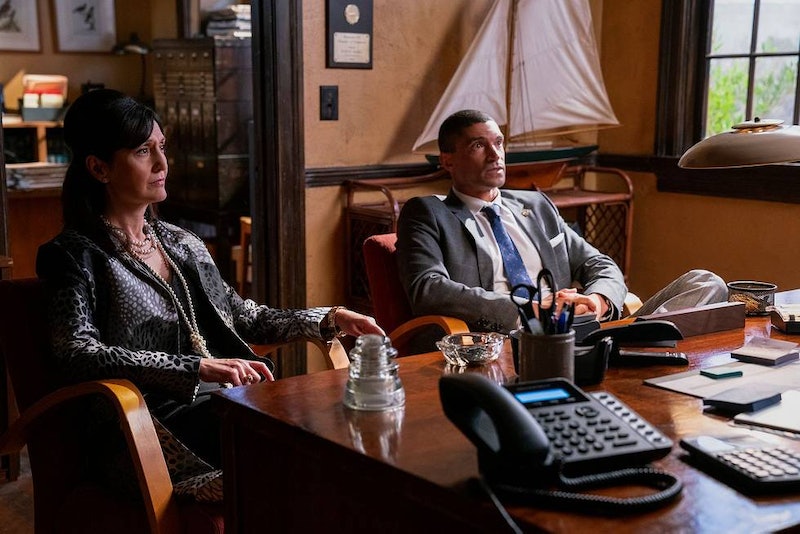 Veronica Mars surprised us all when it dropped its highly anticipated fourth season a week early on Hulu, and now everyone's left marathoning the episodes as fast as they can. There are both old faces and new ones, one of them being Mido Hamada, who plays Daniel Maloof on Veronica Mars. His character is a congressman who has tons of suspicion and mystery swirling around him, and it's probably not the first time you've seen his face on TV.

As it turns out, Hamada is not any stranger to action/adventure series like Veronica Mars. In fact, they're kind of his bread and butter. A look at his IMDb page shows he's had stints on shows like 24, Emerald City, and Counterpart, as well as a role in 2014's American Sniper.

It sounds like he's skilled at bringing tons of emotion to his characters, no matter what's going on in those chaotic plots — The A.V. Club's LaToya Ferguson wrote in her recap of one of the new Veronica Mars episodes that "Mido Hamada plays the escalation of [Daniel Maloof's] desperation and fear tremendously" as his storyline becomes more and more complicated and dramatic.

A couple years ago, while working on Emerald City, Hamada expressed interest in being a part of more updates of old favorites, so Veronica Mars might have been in the stars for him from the beginning. He said he'd like to be part of "an update of another great story."

"In today’s day and age, Hollywood is remaking so many things, so everything is bound to be done or has already been done," he told Pop-Culturist.com. "Some things are better not touched, but for me personally… I’d like to do a Western because that’s a genre I grew up watching. So, maybe, a remake of a classic Western. Maybe another version of True Grit, or another version of High Noon. That’d be interesting to me."

Granted, Veronica Mars is not quite a Western, but he has been able to be a part of a beloved icon people wanted to see return, so that's probably not lost on him.

But Hamada is far from just a Veronica Mars character — just take a look at some of the other slices of his life he's decided to share:

He's encountered a few horses in his time onscreen, and he always manages to post a photo with them.

This photo caption suggests Hamada is somehow involved with Wolf Connection, an organization that advertise "education an empowerment to at-risk groups through the guidance of rescued wolves and wolfdogs." He's also appeared on TV alongside the organization's founder.

...And Wants To Protect Endangered Animals

This is one of a few photos of elephants on Hamada's Instagram feed, and it's clear they're meaningful to him.

He Faces His Fears Head On

I am a firm believer in challenging yourself and pushing one’s boundaries," Hamada wrote in this caption, adding that he's afraid of heights and trying to tackle the fear head on. Maybe he'll be his own stuntman one day.

Hamada shared this photo from the set of the show, saying that stars Kristen Bell and Enrico Colantoni have made him and the other newcomers feel super comfortable on set. That's what we like to hear!

If Hamada's career thus far is any indication, he's probably going to be around for some time to come. Maybe Veronica Mars was just the latest addition to a long line of beloved series he'll become a part of.