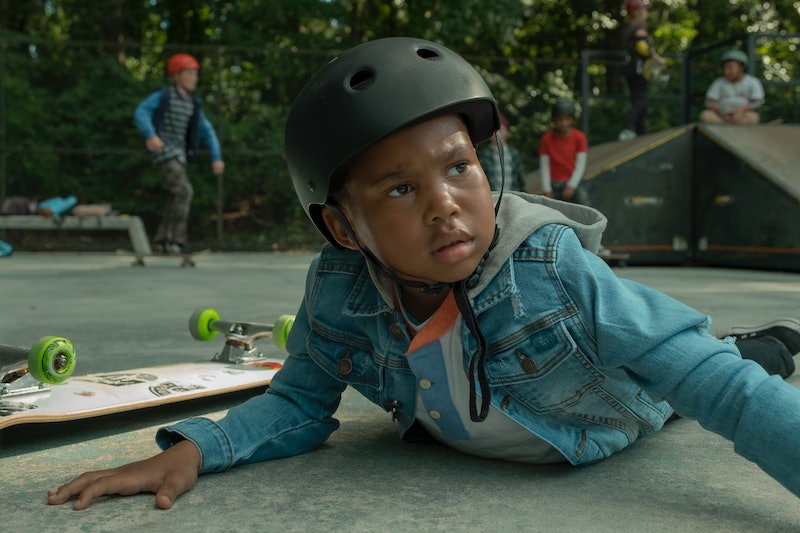 In Netflix's new superhero show, Raising Dion, Ja'Siah Young plays Dion, the titular seven-year-old who suddenly begins exhibiting special abilities. In the trailer alone, he dematerializes in front of an oncoming car and teleports into his mom's arms, suspends fish from a lake mid-air using telekinesis, and seems to have some control over the weather — specifically, the storms are "drawn to him." Inevitably, this quickly complicates the otherwise ordinary life Dion has been leading with his mom Nicole (Alisha Wainwright), who's been doing her best to raise Dion by herself following the death of her husband, Mark (Michael B. Jordan). Soon enough, they have the government hot on their trail, assumedly to try and capture Dion for further study, as is usually the case in superhero shows.

Young's starring role in Raising Dion is his third TV or film part ever, which is still saying a lot for such a young actor. According to IMDb, he previously appeared on an episode of Billy on the Street as "Little Big Shot" and also played a character named Ben in an uncredited role in the Scarlett Johansson movie Rough Night. In addition to Raising Dion, Young will be in the upcoming film Nicole and O.J., playing Nicole and O.J. Simpson's son, Justin.

When Young was younger (which is an absurd thing to say about an eight-year-old, but here we are), he was also a model. He has a page on Look Models & Actors Agency, and he seems to have some raw talent: the boy knows how to give a big, toothy grin just as well as he does a pensive stare.

Naturally, Young is very excited about his role in Raising Dion, firstly because, as he told Entertainment Weekly, he "should be a role model," but also because he "really like[s] superheroes!" just like many other kids his age. He also said that working with Jordan was "amazing," and cutely pointed out that while the 32-year-old actor plays the villain in Black Panther, he's "a good guy in real life."

Like any good seasoned actor, Young has also been promoting Raising Dion a lot on his Instagram — though of course for him, it's a "mommy monitored" account, as the page's bio states. (His Instagram also notes he's a "dreamer," "big brother," "son," "friend," "lover of [dogs]," and a "make believe master.")

Among many pictures hyping up the series on his feed, Young shared an adorable video of himself finding a billboard for the Netflix series. "Guess what guys? I found the raising Dion billboard" he exclaims, pointing upward to the sign. "Make sure you watch it. I'm in it and all my friends are in it. You gotta watch it."

Basically, Young is living a better life than most adults. See him in action when Raising Dion hits Netflix on Friday, Oct. 4.