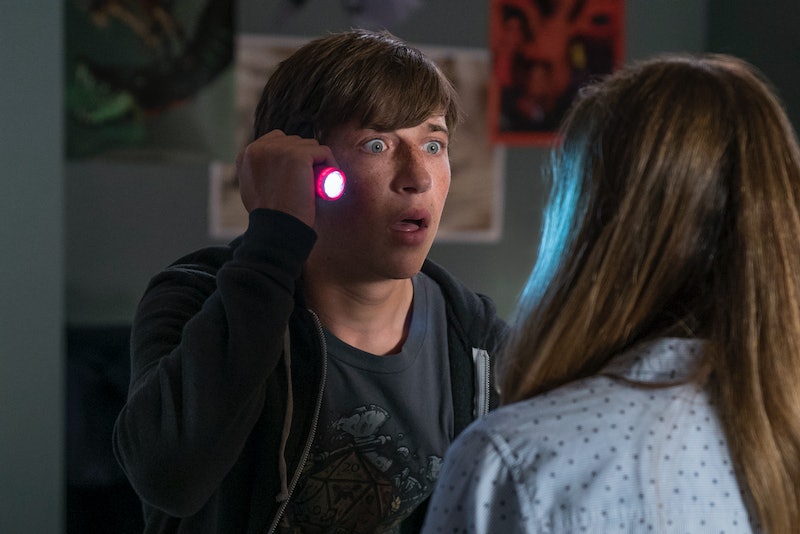 In Netflix's Santa Clarita Diet, a woman named Sheila (played by Drew Barrymore) becomes a zombie — like an actual human flesh-craving undead being. Along for the ride is Sheila and her family's teen neighbor Eric, played by Skyler Gisondo in Santa Clarita Diet. The A.V. Club described Eric as a "paranormal expert," but you may recognize the 20-year-old actor, who has appeared in several high profile film and TV projects, such as The Amazing Spider-Man, Vacation, Night of the Museum: Secret of the Tomb, and Once Upon A Time, among many other roles.

Gisondo was cast in Santa Clarita Diet last year and he expressed joy at the news, sharing a photo of the casting announcement on his Instagram account. "Really, really excited to be a part of the hilarious new Netflix series," the young actor wrote in the caption. Last October, Deadline announced that Gisondo will be joining the cast of Wet Hot American Summer: Ten Years Later as a cool camp counselor named Jeremy “Deegs” Deegenstein. In 2015, Variety reported that the Florida native joined the cast of the drug drama The Godmother, which will star Catherine Zeta-Jones and is produced by Goodfellas' Nicholas Pileggi. So this actor is definitely a star on the rise.

Gisondo played Rusty Griswold's son James in the 2015 movie Vacation, which is a continuation/reboot of the legendary National Lampoon film series from the 1980s. He began playing Gwen Stacy's brother Howard in The Amazing Spider-Man series of films in 2012. In 2014, Gisondo took on the role of Larry Daley's son Nicky in Night of the Museum: Secret of the Tomb, starring opposite big names like Ben Stiller and the late Robin Williams. According to The Hollywood Reporter, Gisondo was a high school senior while shooting the film and his celebrity co-stars helped him ask out his prom date in a video (she said yes).

"It turned into this three-minute, ridiculous thing. A prom-posal," he told The Hollywood Reporter in 2014. "I realized that was the most awesome three minutes of my life and I've accepted it will go downhill from there." Watch the hilarious video below.

Gisondo has also done a lot of voice acting for several sequel movies in the Air Bud series of dog movies, including Snow Buddies, Santa Buddies, and Spooky Buddies. The young actor has also guest-starred on many TV series and you might recognize him from, appearing in shows such as CSI: NY, Once Upon A Time, Pysch, Cold Case, and many others. From 2007 until 2009, Gisondo was a cast member on the TBS comedy series The Bill Engvall Show, playing youngest son Bryan opposite the now-Oscar winner Jennifer Lawrence.

Fourteen years ago, the Florida native made his on-screen debut in the short-lived TV series Miss Match — and he seems to have come a long way since then.

More like this
'iCarly' Season 3 Has A Major “Creddie” Cliffhanger To Resolve
By Brad Witter
Everything To Know About The HBO Max & Discovery+ Streaming Service Merger
By Brad Witter
An Ultimate Guide To The Music Of 'Rap Sh!t'
By Brad Witter
Ellen Pompeo Is Stepping Back From 'Grey Anatomy' For More Than Half Of Season 19
By Brad Witter and Sophia Moore
Get Even More From Bustle — Sign Up For The Newsletter