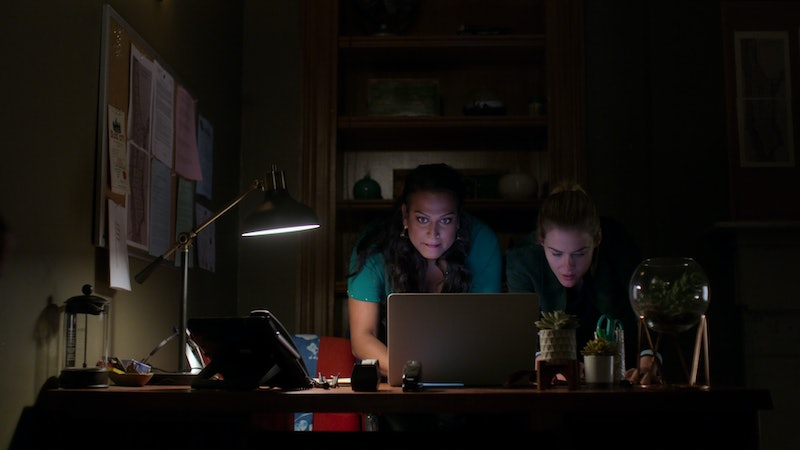 Spoilers ahead for Jessica Jones Season 3, Episodes 1-8. With Malcolm working for Jeri Hogarth, Jessica needed a new assistant for Jessica Jones Season 3. She finds it in Gillian on Jessica Jones, played by Aneesh Sheth. Like Jessica, Gillian takes no crap and isn't always the most friendly person (well, at least to Jessica since the superhero doesn't really earn friendly behavior). Yet, Sheth's Gillian provides some levity and humor to the final Jessica Jones season with her no-nonsense witty retorts and her all-knowing banter with Jessica.

Jessica still has her private investigation company in Season 3, but it's a bit more titled to doing heroic deeds. Jessica has always been a hero, but her mom helped her realize at the end of Season 2 that she has more a good moral center than she likes to admit. As Jessica's assistant, Gillian helps her with the practical side of the hero business. And while Jessica claims to not really like her, Gillian is clearly good at her job.

She helps Jessica find people in need (telling new clients, "You've got a hero on your side now"), doing research, and taking care of Jessica — whether that's providing Jessica with a bottle of booze or giving her the necessary meds she needs after being stabbed by new villain Gregory Salinger.

In an interview ahead of Season 3, showrunner Melissa Rosenberg noted to Bustle how excited she was for fans to meet Gillian. "She's just absolutely freakin' hilarious and wonderful," Rosenberg says. And this new character is likely to quickly become a fan-favorite with her snarky conversational style, cultural hobbies, love of cocktails, ability to go toe-to-toe with Jessica, and penchant for leaving work at 5:00 p.m.

But besides her "people person" likability, Gillian also adds another level of diversity that hasn't been seen on Jessica Jones before. Not only does she add to the South Asian representation in Season 3 along with Sarita Choudhury (who plays Jeri Hogarth's former flame Kith), but as she outlines on her website, Sheth is transgender. And she reportedly appreciates that Jessica Jones just lets her be herself while simultaneously increasing trans visibility.

"There's no mention of her being trans within the show, nor a narrative around her identity," Sheth told the U.K.'s The i Paper about playing Gillian. "Which I think is wonderful because trans people exist in the world and it's not always about their [trans] narrative."

Before Jessica Jones, the Indian-born actress appeared in Outsourced on NBC, Difficult People on Hulu, High Maintenance on HBO, and New Amsterdam on NBC. She's also a stage performer, a trained musician (she sings and plays piano and flute), and has her master's degree in social work. Sheth considers herself a transgender activist and worked with LGBTQ youth as a counselor with The Trevor Project.