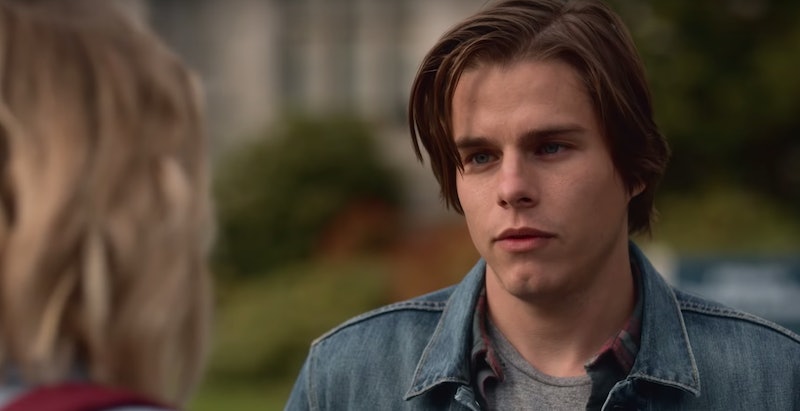 There's a new supernatural show coming to Netflix called The Order. Premiering March 7, it follows college freshman Jack Morton (played by Jake Manley) who joins The Order — a magical dark arts group. Once he's in the secret society, "he's thrust into a dangerous game of life or death" where "he uncovers dark family secrets and an underground battle between werewolves and the magical dark arts," according to the show's synopsis.

The trailer also gives a little bit of insight into who Jack is. He's immediately curious about The Order, and he asks his campus tour guide Alyssa about it. She denies it exists — but later it turns out she's in it. Once Jack joins The Order, Alyssa is tasked with teaching him about magic, and they apparently fall in love in the process. (They're shown kissing during one scene of the trailer.) But this is college and it features magic, so things are going to get complicated for Jack.

First off, he seems to be a special addition to the group, because one of the lead members tells him, "We'll be expecting great things from you." He also has cause to be fearful about joining, because we learn that a werewolf is attacking The Order's recruits. And by the end of the trailer it seems like Jack might even become a werewolf himself. In the final scene, he opens a mysterious box as an ominous voiceover says, "All magic has a cost. If you don't pay the price, things could go wrong," then some sort of creature attacks him. Did Jack not pay and now he's being punished by becoming a werewolf? There's a lot to dissect here.

Manley told Boys By Girls (BBG) that he was really excited to take on the role of Jack because he's a complex character with a lot of material to dig into, but he also reminds him of himself. "He had several layers to him and we had a lot of similarities in what we valued," Manley said. "He was also a little comedic I think, so it was a wide range of things for me to play with for that role."

Among these similarities are that they both value relationships, are high achievers, and like to make people laugh, said Manley. However, the actor added that Jack is "definitely be a bit more dramatic than I would be in certain situations. I think I'm more laid-back and he's a little more emotional about things."

But Jack probably has a right to be emotional considering that the death of his mother is what prompts him to join The Order in the first place, according to the series synopsis. Manley told BBG that Jack will also be a little bit out of place at school because he's "a kind of blue-collar, townie type guy — not coming from a lot of money — but he gets this scholarship to a very prestigious university." And while the show has its dark moments (it's about dark magic after all), Manley thinks it's "also very funny and light-hearted."

Before The Order, Manley was probably best known for his roles on iZombie and Heroes Reborn. Per his IMDb page, he's also slated to be in the sequel to A Dog's Purpose, called A Dog's Journey. But Manley actually started out as a producer, not an actor, according to BBG. Through that, he found out he loved acting as well. "I enjoy collaborating with a team of eclectic personalities and talents; finding true stories or creating fiction that I think people can relate to or help them see things in a different light. And maybe have a laugh or two," he explained, adding that he's interested in directing some day too.

It sounds like Manley has just as many layers as Jack does, and viewers will get to see these layers get peeled back beginning March 7. Manley wrote on Instagram that he's so "excited for everyone to see it soon," so get hyped.