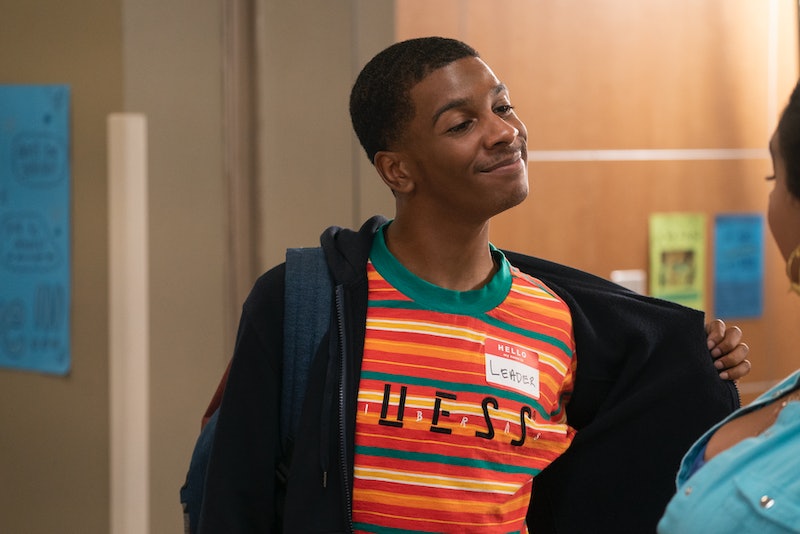 On My Block is just as much about young romance as it is gang wars, but while almost all the characters have been embroiled in love triangles, Jamal's main beau for the last two seasons has basically just been a curvaceous little gnome named Juanita. Jamal had to tearfully return Juanita to Chivo last season, but luckily Season 3 finally introduces an actual human love interest for Jamal. Jamal's new girlfriend Kendra is played by Troy Leigh-Anne Johnson, a newcomer with a Los Angeles theater background.

Johnson is new to TV acting, with her IMDb resume showing that before On My Block, she featured in the short film Ujana. She also has upcoming roles in Let's Scare Julie to Death and A Babysitter's Guide to Monster Hunting (featuring Harry Potter's Tom Felton), which are both in post-production right now.

According to Broadway World, Johnson is a member of the Echo Theater Company and is soon set to perform on Mar. 14 in Poor Clare, a modern twist on the tale of St. Clare of Assisi. Johnson plays the lead role of Clare. Before Poor Clare, she also starred in The Wolves, a play about a women's soccer team, and then Greenway Court Theater's Ripe Frenzy, a play about the before, during, and after of a school shooting.

According to an Echo Theater Company Facebook post, Johnson grew up in Long Beach and has a nickname of "Bambi." Johnson studied at the Young Actor Studio, an acting school based out of Los Angeles and run by Jeff Alan-Lee.

Kendra on On My Block is a quirky character, a girl who's homeschooled and tends to look at everything from a methodical and clinical perspective. Naturally paranoid, Jamal at first assumes that Kendra is a Prophet stalking him, until she reveals her true intentions: she has a bit of a crush on him.

"You seem clean, and different, like me," Kendra tells Jamal, while making notes in her booklet that seems to contain her likes, dislikes, and observations about Jamal.

"It's so funny because [Kendra's] sort of the opposite of Jamal," Jamal's actor Brett Gray explained to ET Online. "She's super shy and really creepy, and really quiet and weird. So, like, it brings him down. You get a little bit more of who Jamal is as a romantic, but it's also the most ridiculous relationship ever."

Gray also told PopSugar that Season 3 is all about Jamal growing as a person, and Kendra is a big part of that. "He's coming into his own and realizing his worth," Gray explained. "In terms of who he is as a young man and where he wants to go in his love life."

More like this
Love Is Blind’s Natalie Claims Shayne Signed Up For 'Perfect Match' While They Were “Still Together”
By Brad Witter
'That '90s Show' Is Officially Coming Back For Season 2
By Gretchen Smail and Grace Wehniainen
The 'Freeridge' Cast Shared Their Hopes For A Potential Season 2
By Grace Wehniainen
You Might Want To Rewatch This Key 'On My Block' Scene To Understand 'Freeridge'
By Grace Wehniainen
Get Even More From Bustle — Sign Up For The Newsletter
From hair trends to relationship advice, our daily newsletter has everything you need to sound like a person who’s on TikTok, even if you aren’t.