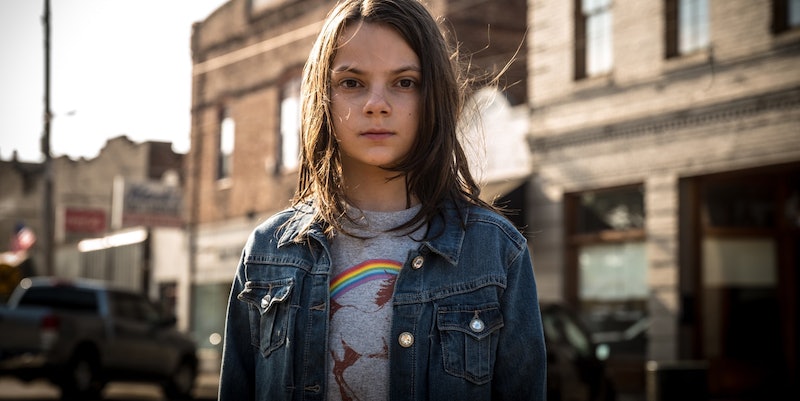 It's one of my favorite movie dynamics: the gruff, reluctant father figure saddled unexpectedly with the care of a child. That's part of the plot of Logan, the X-Men universe movie out Mar. 3. Though, since both Logan and his young charge are mutants, this duo have some fairly unusual traits in common. Hugh Jackman has been playing Wolverine for 17 years, and in this movie, he shares the spotlight with a real newcomer. The adamantium-strong warrior must help protect a child with extraordinary abilities in his third standalone movie. Dafne Keen is the actor who plays Laura in Logan, and it took an exhaustive search to find the movie's X-23.

"It was a worldwide search to find someone who was bilingual because I wanted a Latina kid — one who was between 10 and 12, and was a credible child," Logan director James Mangold told Digital Spy. "I didn't want a young woman in the movie; I wanted it to be a kid, and to feel like a kid." Keen apparently fit the bill. Just 11-years-old during production, the young actor only has one other credit to her name. She played Ana in the UK/Spain co-production The Refugees, which ran for a single eight-episode season. The science-fiction drama uses time travel to re-contextualize the various refugee crises of the present. Keen's character is a member of a family who takes in refugees who have come from the future to find sanctuary.

Dafne Keen acted in that series alongside her father, British actor Will Keen. (He also played Elizabeth's personal secretary Michael Adeane in Season 1 of The Crown.) Her mom is Spanish actress, writer, and director María Fernández Ache. In the same Digital Spy interview, Mangold seems to credit Dafne Keen's industry lineage for her sensitivity as a performer. "Her parents are actors, and she's kind of a very modern kid," Mangold said. "Very physically capable. Incredibly gifted as an actress." Keen's listing on her agency's website indicates that she's also trained in dance and gymnastics, which surely helped her the fulfill the part's movement requirements.

When the first Logan teaser hit the internet, it wasn't made explicit what part Keen would be playing. Fans had their theories based on the comic book mythology of X-23, a clone constructed from Wolverine's own DNA. It was confirmed via an October Instagram post on the official Logan account that Keen is playing Laura, known to her villainous creators as her program code name. Mangold told Digital Spy that Laura and Logan share more than just their regenerative properties and lethal claws. "She's an 11-year-old girl equipped with all the volatility, instability, mood swings, shadows and potential violence of our hero," he said.

Logan appears to be setting up a storyline wherein Wolverine passes the torch to a young successor. Jackman claims that this movie will be his last outing as the X-Men character. So though a follow-up has not been announced yet, Keen could be stepping up as the center of a new Wolverine franchise.

More like this
Everything To Know About 'The Hunger Games' Prequel Movie
By Grace Wehniainen and Radhika Menon
Jennifer Coolidge Just Said The Most Controversial Thing About Legally Blonde’s “Bend & Snap”
By Maxine Harrison
Revisit 1992’s 'A League Of Their Own Cast' Photos After The New TV Series
By Grace Wehniainen
At 28, Lesley Manville Was Acting, Picketing, & Singing Kate Bush Songs
By Olivia-Anne Cleary
Get Even More From Bustle — Sign Up For The Newsletter