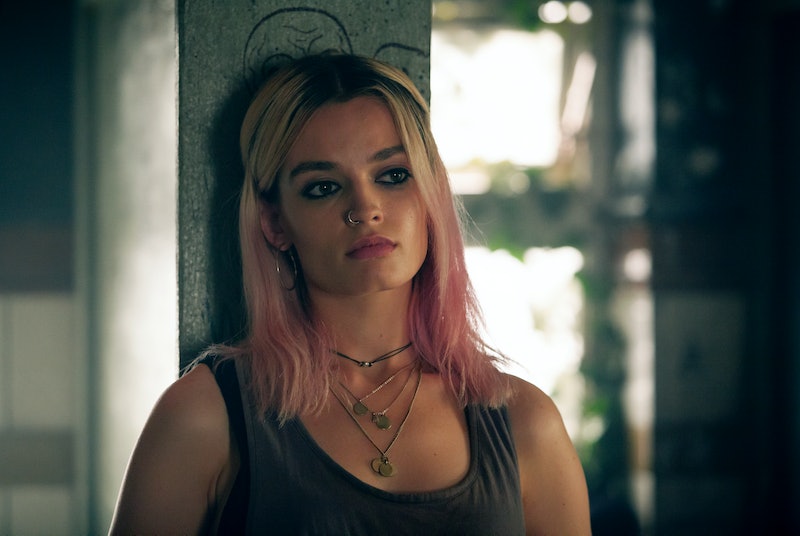 Sex Education is the raunchy coming-of-age dramedy that's been sweeping Netflix, and its success is definitely thanks to the incredible cast the show has brought together. So who plays Maeve on Sex Education? The character is one of the masterminds behind her and Otis' plan to educate their peers.

Maeve is portrayed by actor Emma Mackey, and this is really her first big role. According to her IMDB page, she had a supporting role in a made-for-television horror movie called Badger_Lane, which came out in 2016. But otherwise, she's a complete newcomer to the scene, and she's stolen the show on Sex Education. Mackey completely delivers as a teenager with a tough girl exterior who shows moments of pure vulnerability. Maeve and Otis hatch an idea to use the ideas presented by Otis' sex therapist mother to help their peers at school work through their adolescent issues. It's a premise that's both hilarious and surprisingly touching, and almost immediately, reviews for the show have heralded it as a huge success.

"One of the best things about this show is the fact that so many of these characters do feel like kids — not hyper-articulate young adults, but scrambling teenagers who don’t really know how they feel about anything — they just know they feel it," wrote IndieWire's Liz Shannon Miller. Even among an entire cast that pulls out all the stops, Mackey shines. "Sex Education has a knack for introducing characters as stereotypes, then complicating them: jocks have anxieties; nerds have lusts; mean girls and bullies have sympathetic backgrounds," The New York Times' James Poniewozik wrote, before explicitly calling Mackey's character as a high point. "Maeve, in particular, is exquisitely drawn — she’s smart, tough and outcast both for being poor and for being a girl who has sex and likes it."

Mackey has already given interviews saying she hopes Sex Education helps young people feel less alone when it comes to their bodies and their sexualities. "There are lots of young women who feel like they have an ugly vagina or their vagina is wrong and it has to look a certain way," Mackey told Refinery29 in reference to a plotline in Episode 5. "There’s this whole generation of young women who feel like they’re not adequate enough. I just find it so sad, and I really hope … this show will open conversations around topics like that."

Mackey has shared photos on Instagram of herself hanging out with the rest of the Sex Education cast, showing that they had a blast filming, which makes the show even more enjoyable. Given the huge response fans have already had to the empathetic series after only a few days of streaming, it's only natural to hope Sex Education returns for Season 2. There's not any indication yet on whether that'll happen, but hopefully the high praise lends itself to a continued run.

Aside from acting, Mackey seems to keep busy. Her Instagram features modeling shots, pictures of books she's reading, and beautiful photos of adventures around the world. After the splash she's made with this role, it definitely won't be the last we see of her.

More like this
Pete Davidson & Kate McKinnon Are Part Of A Reported Major SNL Cast Shakeup
By Brad Witter
Grey's Anatomy Fans Refuse To Accept Kaimelia's Shocking Relationship Update
By Brad Witter
Yes, Billboard Queen Angelyne Really Ran For Governor Of California
By Brad Witter
8 Mick Carter Moments That Made 'EastEnders' History
By Niellah Arboine
Get Even More From Bustle — Sign Up For The Newsletter