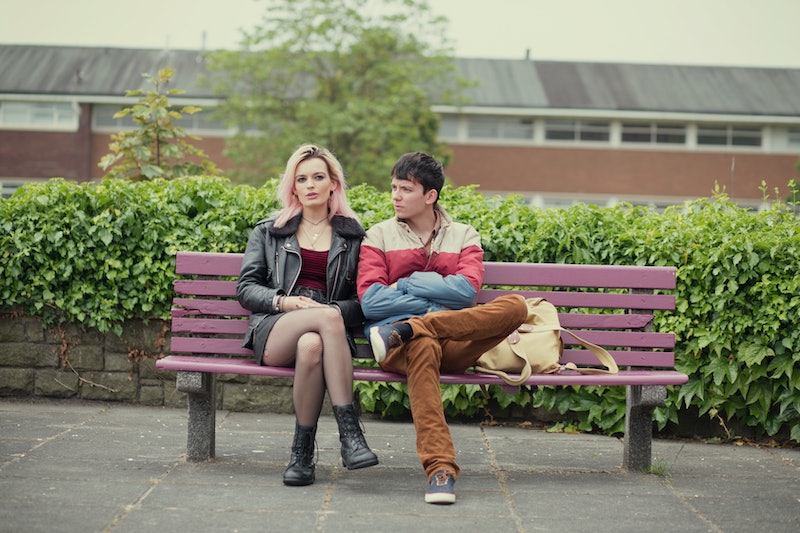 Too often when teenage relationships exist onscreen, their intimate moments are portrayed as effortlessly romantic, deep and life-changing, or worst of all, as never even happening in the first place. These scenarios are typically a far-flung fantasy from what most people experience navigating their sexualities as teenagers, but a new Netflix show is offering a refreshing take on just how complicated that part of life can be. Sex Education helps normalize conversations about teen sex, and it's a breath of fresh air from a medium that doesn't always know how to handle the topic.

The show focuses on Otis (Asa Butterfield), the awkward, virgin teenage son of a sex therapist (Gillian Anderson). Otis and his friend Maeve (Emma Mackey) decide to put his mother's sometimes-overbearing skills to use in order to make a little cash — they discover that their classmates are bogged down by sex and body issues they're not comfortable speaking about with anyone, even their partners. Otis becomes the high school's de facto hired sex therapist, helping his fellow teenagers with everything from erections that won't go away to self-conscious partners who won't have sex with the lights on.

The sex scenes can be raunchy — sometimes comically so — but more than anything, the awkwardness of it all feels realistic. There are no sweeping romantic gestures that lead to dramatic elevator love-making à la Gossip Girl. The teenagers don't have the skills and know-how of someone who's been dating and experimenting for a decade, and thank goodness for that, but that doesn't mean their encounters aren't sweet or fun.

Exploring sex for the first time is usually nerve-wracking at a base level. Couple that with inadequate sex education at school and parents who don't quite know how to talk about sex, especially to their LGBTQ kids, and it's the perfect cocktail for low self-esteem, feeling left out, and at the very worst, depression even. It only worsens when teens flip on the television and see all these beautiful people, supposedly their own age, already pros at every level of intimacy.

When pop culture neglects to acknowledge that teenagers have sex at all, well, that's a problem of its own. Pretending sex doesn't happen among teens is demonstrably unrealistic, but ignoring adjacent issues like unwanted pregnancy, sexually transmitted diseases, consent conversations, and LGBTQ intolerance does a disservice much more severe. Teenagers should feel like they can say something if they're unsure of something that's happening in their sex lives — if not to parents, then at least friends or someone they trust. Remaining silent about something causing them stress is a recipe for disaster, particularly if they feel like they're the only one it's happened to.

Coming-of-age TV shows and movies like Sex Education are the perfect avenue to normalize these conversations, and offer a source of empathy to teens who might not feel like anyone really gets them. It hits the high points and low points, and doesn't shy away from the bumps and bruises. But ultimately, it's an encouraging voice. Otis uses the advice he hears from his mother to help his peers feel more confident in their sexual identities, more comfortable talking to their partners about what they need, and more secure in their private decisions. They're all in it together, and the series makes the viewer feel like they are too.

One of the big strengths of Sex Education, despite its name and subject matter, is that it never feels like an after-school special. It's sometimes reminiscent of another Netflix series, the animated Big Mouth, which tackles similar topics with a more outrageous spin. It's sending a message, sure — but its story holds up, and doesn't feel preachy, condescending or flippant.

Rather, Sex Education is genuine, funny, heartbreaking and comforting, much like a friend you might've confided in as you navigated these waters for the first time. The show's approach feels like the way we should always be portraying teenage sex in popular culture. It's taken seriously, but not put on a pedestal that makes it all the more daunting. It's allowed to be fun and silly and exciting, but when it's not, there should be ways of communicating fear or boundaries. Sex Education stands firmly in that position, and if shows took this route more frequently, teenagers encountering the hiccups at hand might just feel far less alone.

More like this
Nicola Coughlan Shared A Lady Whistledown Excerpt From ‘Bridgerton’ Season 3
By Grace Wehniainen, Alyssa Lapid and Sam Ramsden
The 'Bachelor In Paradise' Schedule Shifts To 4 Hours Every Week After The Season 8 Premiere
By Brad Witter
The 'Andor' Timeline, Explained
By Gretchen Smail
Alicent's Green Dress In 'House Of The Dragon' May Be An Act Of War
By Kadin Burnett
Get Even More From Bustle — Sign Up For The Newsletter