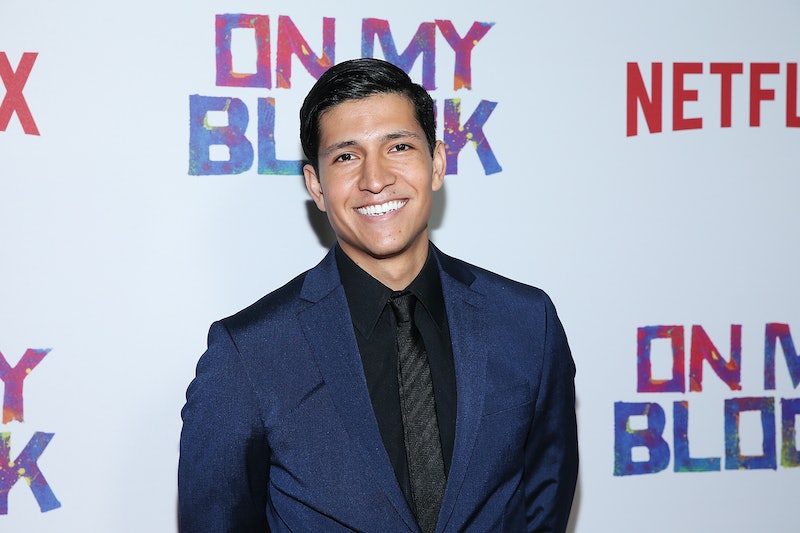 On My Block is finally back. The coming-of-age Netflix series has captured the hearts of fans with the stories of several Los Angeles teens who are finding their individual purpose and testing the boundaries of their friendship in the difficult world of high school. One of the best aspects of the show is its extremely diverse cast, which includes Danny Ramirez portraying Mario Martinez, who plays Ruby's older brother.

Per IMBD, Ramirez had a recurring role in The Gifted as Wes along with several one-off appearances in TV shows like Blindspot, Orange Is The New Black, and The Affair. He also nabbed small roles in 2018 films Assassination Nation and Valley Girl around the time On My Block made its debut. Mario was largely absent in Season 1 due to leaving for college, but he has a much bigger, recurring role for Season 2. He's not just home to provide some moral support after Ruby was shot at the end of last season. That would be too easy. Instead, Mario comes home from college with a new girlfriend in tow, and their relationship gets some solid subplot treatment.

Mario and Ruby actually love each other, but they have a typical sibling relationship in that they irritate and tease each other, which we didn't get to see play out too much in Season 1. That's all changed, now.

When Mario shows up with his new, white, and pregnant girlfriend, the house gets all the more crowded. Although his new girlfriend's pregnancy is treated as a sort of joke, Mario and Ruby do spend some solid brotherly time together and support each other when things start to go south. That's what brothers are for, right?

But, Ramirez’s On My Block role seems to have spring boarded his career with a string of upcoming TV and movie roles according to his IMBD filmography page. The most notable role will be in Top Gun: Maverick, the long-awaited sequel to the classic 1986 movie. It's expected to drop in June 2020, so Ramirez is probably in the midst of filming right now.

Per Comicbook.com, Ramirez will portray a pilot trainee alongside the original film's stars Tom Cruise and Val Kilmer. It could be the perfect way to further boost his career and gain a legion of new fans who will be checking out this movie to quench their thirst for 80’s nostalgia. Or, he might just die in the first few moments of the film and not make a major impact in the movie.

Ramirez’s relatively chill Instagram page features occasional photos of him hanging out shirtless in Mexico, spending time with co-workers on set, and several James Dean-esque model poses that show off his well-coiffed hair and wide smile. There’s not a lot of clues about his personal life nor his origin story, but perhaps those details will come to light as On My Block continues to grow alongside his upcoming acting gigs.

Hopefully, Danny Ramirez will continue to nab awesome roles and continue bringing Mario to life in Season 2 and any future seasons to come.

More like this
Twitter Is Pouring Out Some Zhampagne As ‘Schitt’s Creek’ Leaves Netflix
By Brad Witter
Here’s Where You Can Stream 'Schitt's Creek' After The Comedy Leaves Netflix
By Brad Witter
If 'Entergalactic' Season 2 Happens, You Could Get A New Kid Cudi Album
By Kadin Burnett
Mike Flanagan Teases 'The Midnight Club' In This Exclusive, Creepy Clip
By Grace Wehniainen
Get Even More From Bustle — Sign Up For The Newsletter