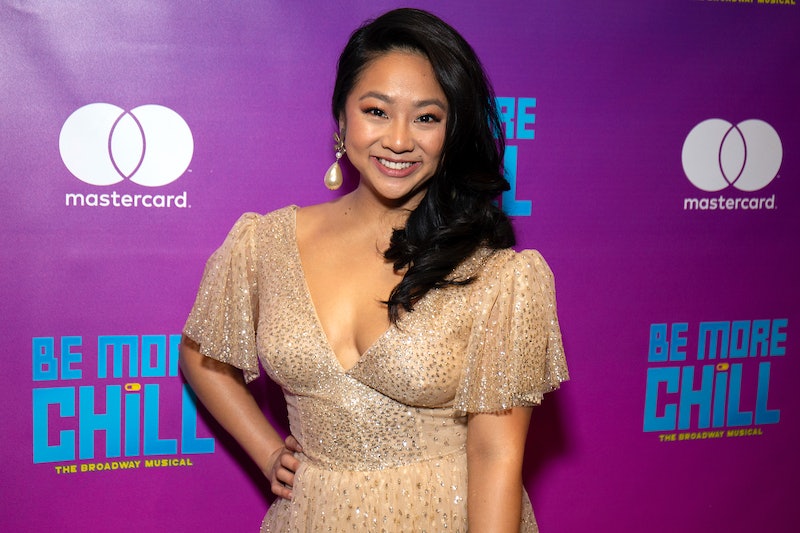 Light spoilers ahead for The Marvelous Mrs. Maisel Season 3. Marvelous Mrs. Maisel's third season is noticeably more diverse than its first two, thanks in part to character additions like singer Shy Baldwin (Leroy McClain), his manager Reggie (Sterling K. Brown), and Joel's new love interest Mei, played by Stephanie Hsu. But it's particularly fitting for Hsu that she wound up with a role on a show all about breaking boundaries on stage.

Per Teen Vogue, after Hsu's mother immigrated from Taiwan when she was in high school, Hsu grew up in Southern California. She expressed an interest in the arts early on, but like many immigrant parents, Hsu's mother was doubtful about the opportunities Hsu would have if she pursued acting, as it was especially rare to see Asians on stage or on the silver screen. (On Broadway, Asian Americans still account for only 4% of roles.)

But Hsu forged ahead, eventually graduating from New York University's Tisch School of the Arts, where she studied at the Atlantic Theater Company and Experimental Theater Wing. After graduating, she immersed herself in the downtown Manhattan theater circuit, doing an experimental performance called War Lesbian.

In 2015, Hsu landed the leading role for the musical Be More Chill, a high school sci-fi romance about a boy who consumes a mini supercomputer in the hopes of becoming more attractive to Hsu's Christine Canigula, the school's theater nerd. It opened to so-so critical reviews and only had a brief month-long run in New Jersey, but it was dearly beloved by teens; Vox reports that it became the second-most-talked-about musical on Tumblr in 2017, right behind Hamilton. Since then, Be More Chill's album has reportedly been streamed more than 250 million times, and the play even returned to Broadway in February 2019.

"When I first did it in New Jersey, it didn't clock in my mind, 'Oh I'm playing a female leading lady and I am Asian American and this is rare,’” Hsu told Teen Vogue. "When I found out that we were transferring to Broadway, it was the first time that it really, truly hit me. I started crying, because if I was younger and had a Christine Canigula who looked like me, it would have changed my entire perception of what was possible as a young, aspiring actress."

Hsu is very aware of what it means to be an Asian actress in Hollywood. "I feel a certain type of obligation to be making more space for younger versions of me," she explained to Teen Vogue. "Because a lot of that space is happening in TV and film, and Broadway's a little more antiquated in that way.”

Hsu's own role as Mei is proof that TV is inching towards showcasing a more diverse — and more realistic — world. Marvelous Mrs. Maisel has been criticized in the past for its lack of non-white central characters, and for its inability to explore 1950s racism in any meaningful way, which is particularly notable considering Midge skewers just about every other aspect of American life in her standup routines. (Some have made jokes that the only Asian on Marvelous Mrs. Maisel's past two seasons was a woman sitting on a bench in the background, though a character meant to be Yoko Ono also appeared in one scene.) Mei is the first Asian character with a significant speaking role on the entire show, and that fact alone makes her notable.

Fans will have to wait and see how her romance with Joel unfolds throughout the season, and how much of a role she'll play going forward. (We'll also have to wait and see if Joel actually deserves her; my money is on "no.") But Mei is a spunky character who clearly has an intriguing backstory, and it's high time Marvelous Mrs. Maisel explores the stories of women who don't just glide through the upper echelons of society with a closet full of glamorous dresses.

More like this
Emilia Clarke Remembers Her Broadway Debut As A “Catastrophic Failure”
By Stephanie Topacio Long
Why Simone Ashley Had To Study Snails For Intimacy Training, Pre-‘Bridgerton’
By Grace Wehniainen
Julie Andrews Revealed A Surprising Behind-The-Scenes 'Bridgerton' Detail
By Grace Wehniainen
'The Undeclared War' Spotlights The Real-Life Threat Of Cyber Attacks
By Maxine Harrison
Get Even More From Bustle — Sign Up For The Newsletter