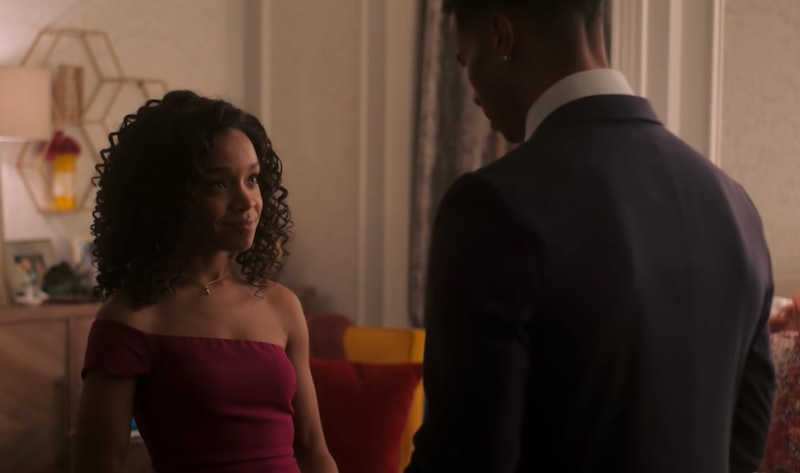 Spoilers for Love, Victor episode 1. When Love, Simon hit theaters in 2018, it won audiences over with its sweet coming-of-age story about a young man finding the courage to come out to his friends and family amidst the whirlwind romance he's found online. Now, fans will have another endearing story to look forward to: Love, Victor, which premieres on Hulu June 17. The show stars Michael Cimino as Victor as well as a great cast of up-and-coming actors, like Rachel Hilson, who plays Mia, and has appeared in quite a few of television's greatest hits over the past few years.

The premise of Love Victor is very similar to that of Love, Simon's — it even takes place in the same high school, where Victor is now a student. And much like Simon, Victor is closeted and searching for ways to come out to his parents and friends. As Victor continues to struggle with his journey, he reaches out to Simon via a series of messages, hence the title and the connection.

But again, Victor's journey is going to be quite a bit different. For starters, he's secretly crushing on Benji (George Sear), a musician and local heartthrob who's managed to capture Victor's attentions. But he begins flirting with Mia, a popular girl who is seemingly the crush of nearly everybody at Victor's high school. As Victor's friend, Felix (Anthony Turpel) puts it, "Everyone is obsessed with her. Even the bathroom graffiti about her is respectful."

While Mia is poised to be a breakout role for Hilson, this is far from the first time she's graced your television. Hilson's previous roles include This Is Us, where she played Beth Clarke, the teenage version of Susan Kelechi Watson's Beth Pearson. She held the role for a seven episode arc that focused almost exclusively on Beth's backstory, providing the whys and wherefores of her character and what brought her to where she is now.

According to Essence, Kelechi Watson was very taken with Hilson's performance. She told the outlet, "When I was watching her I was like, ‘What? I do that?’ What Rachel did was so amazing." For Hilson, starring in This Is Us was a chance to also show off some of her other skills, as well. She explained to Essence, "I haven’t had an experience yet in my career where I’ve gotten to combine both acting and dance, two of my passions, so it all fell into place in a special way." That dance talent also landed her a role in Rise as Harmony Curtis. The show was a short-lived NBC musical drama series about a group of students navigating coming of age while performing in a rigorous, highly competitive high school drama department.

Many of the shows featuring Hilson's characters explore the pressures of being a teenager and what it means to grow up in the here and now. Speaking about her role as Mia in Love, Victor to the New York Daily News, Hilson said, "She’s incredibly kind and compassionate and artistic, and she’s strong. She’s dealing with a lot in her home and family life, and feels as though she has to maybe mask that at school." She went on to say, "I think that’s always interesting. We’re always kind of putting on versions of ourselves, and I think that’s the work of being a human and being a teenager, trying to find the balance of being ourselves and not caring so much what people think."

More like this
Pamela Anderson’s Dating & Marriage History Could Be Its Own TV Series
By Jake Viswanath
Wait, Is Barney Stinson Related To Sophie On 'HIMYF'?
By Gretchen Smail
Everything To Know About 'Only Murders In The Building' Season 3
By Gretchen Smail and Kadin Burnett
All The ’70s Easter Eggs You Missed In 'That ’90s Show'
By Grace Wehniainen
Get Even More From Bustle — Sign Up For The Newsletter
From hair trends to relationship advice, our daily newsletter has everything you need to sound like a person who’s on TikTok, even if you aren’t.