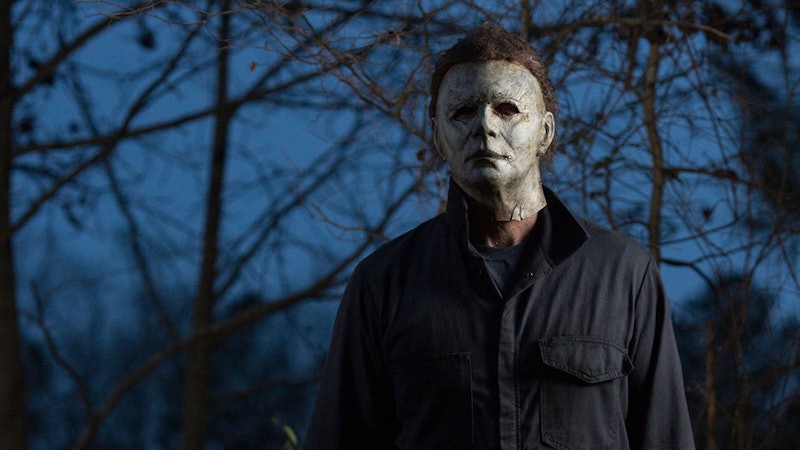 If you haven't seen the gazillion (OK, 11) movies in the Halloween franchise, don't worry, you really only have to have seen the original 1978 slasher flick in order to understand what's going on in the new Halloween movie. And even if you didn't see it, you know the basic gist just from horror movie tropes and Halloween holiday legend: creepy stalker in a scary white mask goes around killing babysitters and others on Halloween night. But who plays Michael Myers in the new Halloween? We never really see his face, so it's hard to tell.

The new movie picks up 40 years after that original one and negates all of the other sequels and remakes since then. It's essentially a direct sequel, so, appropriately, it reunites a lot of the cast and creative team from the original movie. But what about the killer himself? There's more than one person underneath that mask.

Halloween, now playing, brings back a number of cast members from the original 1978 film. Jamie Lee Curtis returns as Laurie Strode, the original survivor of Michael's terrorizing killing spree from the first movie. Now 40 years later, this year's Halloween doesn't just bring back Curtis, it also brings back the original Michael Myers actor, Nick Castle, who plays the killer under the mask, plus James Jude Courtney, both credited as "The Shape." It's also suspected that Tony Moran, who provides Michael's "real face," also makes an appearance.

For the majority of the new film, Michael Myers, also known as simply "The Shape," is played by an actor named James Jude Courtney, who has some horror experience having appeared in Buffy the Vampire Slayer the TV series. But the OG Shape does make a comeback, he revealed in an interview with Bloody Disgusting. In the original movie, actor, writer, and director Nick Castle played the Michael Myers underneath the mask, disguised as he stalked and murdered babysitters and bystanders. Castle returns in this year's Halloween for some specific scenes with Curtis, the two foes reuniting for a potential final face off. Castle also performs Michael's signature heavy breathing in the latest movie, adding the bone-chilling breaths in post-production; a super creepy addition to his resume.

But there's a third actor who may possibly make an appearance in the Micke Myers regalia in Halloween 2018. In the original 1978 movie, Laurie pulls off Michael's mask for a moment and for that scene Michael was played by Tony Moran. As a result, Moran became known as the face of Mike Myers, no matter how many other actors played him throughout the years. Michael's face has been seen only for moments at a time at various points throughout the franchise, but fans are wondering if Moran is going to make a comeback now as well. Moran isn't on the official IMDB list of cast members, but that doesn't mean that he isn't making a surprise return. In fact, some fans are hoping for it. According to Screen Rant, Moran is featured in the movie and can be seen in a recently released scene. Others are saying that the actor in the scene looks like Courtney, but Moran returning would certainly be cool

Whomever dons the terrifying Mike Myers mask for this new iteration of Halloween, it's certainly neat that the movie is reuniting cast members from the original movie. Curtis's Laurie Strode has gone down in the horror history books as one of the most important characters in the genre, and Curtis has certainly forged a long career building on that. The new movie is also bringing back John Carpenter, the original writer and director of the '78 movie, to executive produce and score this film. Carpenter even told Entertainment Weekly that this Halloween is the best one in the franchise since his original film. With praise like that, and the original Mike Myers to boot, this Halloween may be a new classic.

More like this
24 Photos Of The 'Love Actually' Cast Then & Now
By Grace Wehniainen
This Iconic ‘Love Actually’ Scene Drove Alan Rickman “Insane”
By Grace Wehniainen
Lindsay Lohan Just Recalled A Hilarious 'Parent Trap' Story
By Sam Ramsden
Then Vs. Now Photos Of The 'Enchanted' Cast In 2007 & The Sequel's Stars In 2022
By Marina Watts
Get Even More From Bustle — Sign Up For The Newsletter