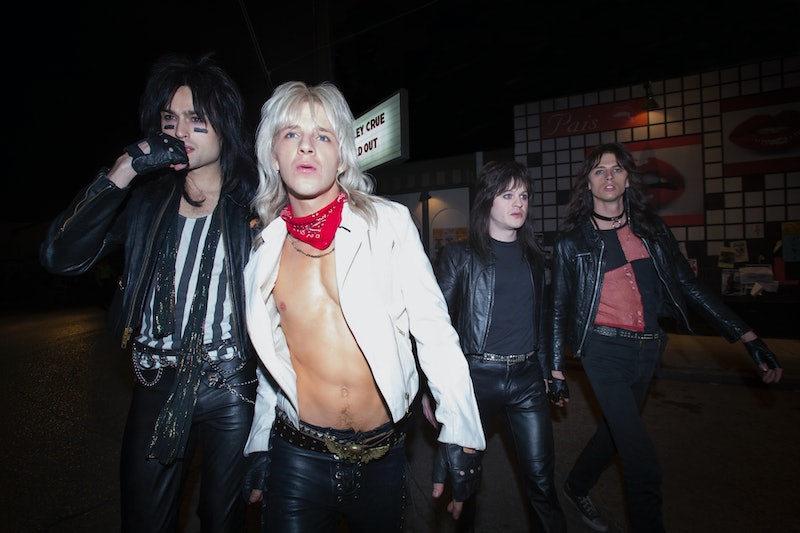 They were the wildest, most notorious band in L.A.'s glam metal scene, with a reputation that left hotel managers praying they'd stay somewhere else when they blew into town. Mötley Crüe lived up to every stereotype of the rock n' roll lifestyle, with enough sex, drugs, partying, and violence to last several lifetimes. In 2001, the Crüe put it all down on paper in bluntly honest autobiography The Dirt: Confessions of the World's Most Notorious Rock Band, revealing the pain and relationships behind the glamorous front, and now that story's making its way to a screen near you. But who plays Mötley Crüe in The Dirt, premiering on Netflix Mar. 22, and can they possibly match their real-life counterparts for debauchery?

The lineup of lead singer Vince Neil, bassist Nikki Sixx, guitarist Mick Mars, and drummer Tommy Lee has remained fairly consistent throughout the band's history. The Dirt focuses on the band's early years, as they ascend to superstardom from the sleazy grit of L.A.'s clubs in their 20s. That means rounding up some younger blood to play the band before their prime and through their peak depravity.

Band frontman Vince Neill is played by an actor who's probably new to you. Australian actor Daniel Webber's played a number of unfortunately iconic Americans, including his best known role as a PTSD-suffering ex-soldier on The Punisher TV show, and his intense portrayal of Lee Harvey Oswald in Stephen King adaptation 11.22.63. In a red-carpet interview with Instinct Culture, the young actor explained that bombastic frontman Neill, the quintessential rock n' roll frontman, was a role he'd been holding out for. "I auditioned all last year, waiting for a role that really called to me. It was...very expressive and just let me grow as an artist and...a performer," he said. "That can be a hard thing to wait for, but I think it's an essential."

Nikki Sixx gave Douglas Booth his personal seal of approval on Twitter, calling the 26 year-old Englishman a "killer actor". It's not Booth's first time playing a musician, as he played young Boy George in TV movie Worried About The Boy, following the singer's early life. In an interview with Ultimate Classic Rock, co-star Colson Baker, aka Machine Gun Kelley, said from the first day of shooting in New Orleans Booth got into his role; perhaps a little too into it. "Within the first 30 minutes Doug was like, 'I’m Nikki Sixx, bitch!' and bit [director Jeff Tremaine’s] shoulder so hard he still has bite marks and purple rings around the bite marks," he claimed. "As soon as Doug bit the director, we knew that it was going to be a ride."

In the same article, Baker said he had to audition six times over two and a half years to get the role of infamous bad-boy drummer Tommy Lee. Talking about the book The Dirt, Baker said, "It was my Bible...I had the wrong idols growing up, for sure." Reading it when he was only 13, he didn't pick up on its heavier themes until much later, and once on set worried, "Whoa, this is dark. What are people going to think about this? But there’s something about the truth in that book — the fact that you do fall in love with these people [who] then do this giant nose dive into this dark place."

Game Of Thrones' Ramsey Bolton, aka Iwan Rheon, plays Mick Mars, and tells The Hot Corn the change was freeing. "It’s more fun to do different things and go to different places, particularly when I was playing such a horrible character, an evil character," he said, adding that "playing someone who is alive today is cool, and to get to be in a band ... we spent three weeks learning the songs as a band, and reproduced the live stuff so it could look as authentic as possible, which was really good fun."

It looks like The Dirt's cast will do justice telling a story that's pointedly dedicated "to our wives and children, in the hope that they may forgive us for what we've done."