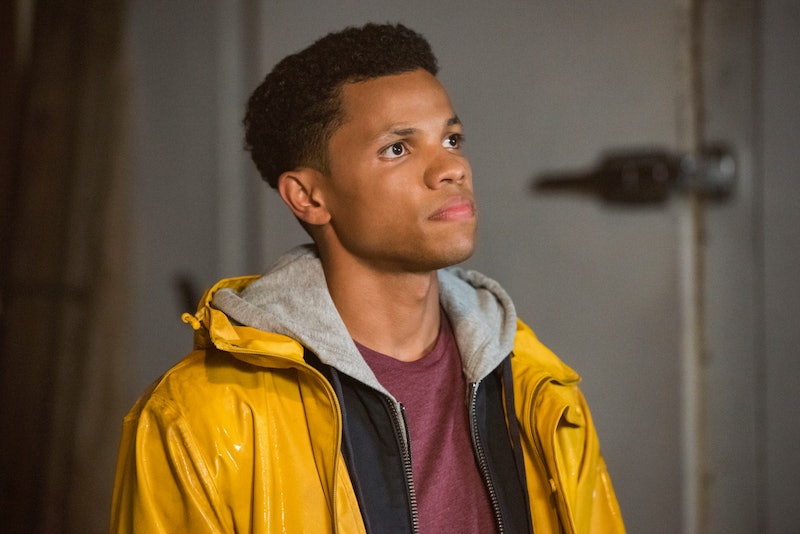 In The CW's Nancy Drew, Nancy (Kennedy McCann) has a cute, semi-secret boyfriend just like she does in the books. But this version of Ned "Nick" Nickerson, played by Tunji Kasim, is much different than his literary counterpart. Which is just a polite way to say that he and Nancy have a lot of sex... and he might be a murderer. By the end of the first episode, Nancy begins to think Nick (in the CW version, he goes by a nickname) could be responsible for Tiffany Hudson's murder, which never would have occurred to her in the novels, where Ned was very preppy and straight-laced.

Kasim is just as intrigued by his character as Nancy is, as he told ET Online, "He’s got a bit of a past and you kind of find out as you go, We kind of reimagined Ned Nickerson significantly. And as we go, mysteries will be kind of revealed about what he’s hiding." Because of Nick's sordid past, Kasim felt necessary to seek outside help in portraying accurately.

"The biggest thing about Nick is he’s been to prison," he revealed in an interview with MEAWW. "He’s committed a pretty big crime like manslaughter. We were fortunate enough to work with a group of members from the ARC, a nonprofit organization from Los Angeles. They have been through the prison system, get education degrees, and reintegrate back into society. I was able to look up to all those guys and do my own research."

Talking to The Daily Bruin, Kasim added that working with the ARC gave him a perspective he wouldn't otherwise have had and enabled him to approach the role with much more empathy. "They gave me insight into the authentic grounding of Nick’s experiences rather than being unrealistic or superficial just for the drama of it," he said. "It allowed me a glimpse into a more meaningful, emotional journey."

That kind of deep preparation is likely a result of all the time Kasim, who was born in Scotland, spent training at the Royal Scottish Academy of Music and Drama before starring in a variety of theater roles beginning in 2006 including Talented Mr. Ripley, Big White Fog, and several productions as part of the Royal Shakespeare Company.

He's perhaps best known for his role on the British TV series Nearly Famous, which aired in 2007, but he's also had smaller roles on shows like Shetland and Cold Feet, according to his IMDB page. He even made the leap to the big screen in movies like the Meryl Streep drama Florence Foster Jenkins and the Alexander Skarsgard war drama The Kill Team.

Now, Kasim is taking on a classic role on the CW. Hopefully he turns out to be a good guy, because his relationship with Nancy might just be the best thing about this new adaptation of the classic tales.

More like this
Nicola Coughlan Shared A Lady Whistledown Excerpt From ‘Bridgerton’ Season 3
By Grace Wehniainen, Alyssa Lapid and Sam Ramsden
Viserys’ Fate On 'House Of The Dragon' Could Differ From The Book In This Surprising Way
By Grace Wehniainen
'The Lord of the Rings: The Rings of Power' Revisits Iconic Spots From 'The Hobbit'
By Darshita Goyal
Wedding Season’s Omar Baroud Currently Stars On West End
By Darshita Goyal
Get Even More From Bustle — Sign Up For The Newsletter