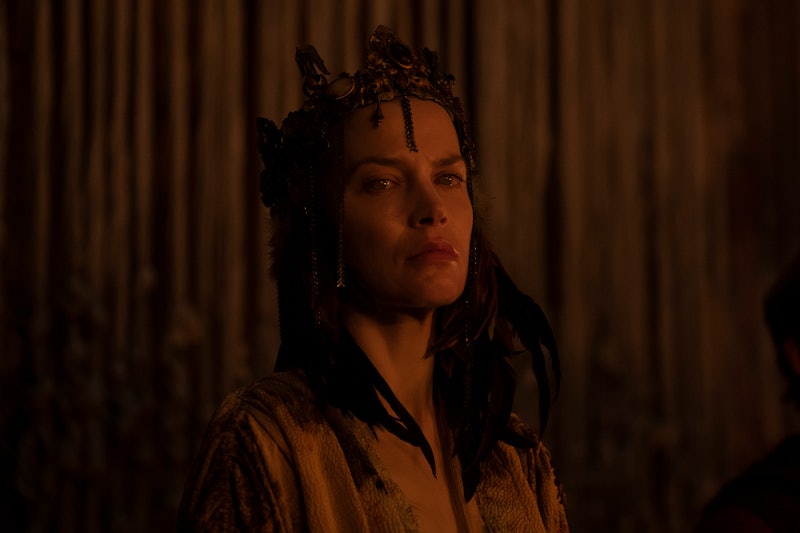 There's no shortage of evil queens in fiction and with the launch of Apple TV+, Sylvia Hoeks' See character, Queen Kane, joins the pantheon of wicked storybook queens. See is structured very much like a fairy tale — at its core, it's really a story about two children with a "very special gift" and a queen who wishes to have them captured for her own purposes. Queen Kane has shades of the Evil Queen from Sleeping Beauty and the witch from Hansel & Gretel, but twenty times more brutal (and sexual, as she inexplicably communicates with her god through orgasm).

The actress spent decades acting in Dutch projects such as Tirza and The Gang Of Oss, and Duska, for which she was awarded the Golden Calf award at the Netherlands Film Festival for Best Supporting Actress. Then, after being cast as the villainous replicant Luv in the film Blade Runner 2049, she has appeared in various American films, such as The Girl in The Spider's Web and the action movie All The Devil's Men.

Hoeks told Collider that she was trying to "avoid" doing a series but that when she read the See script, the "story was so, so beautiful and so wonderful and so exciting." Hoeks' is no stranger to playing villains, but Queen Kane has a bit more going on under the surface than her turn as Blade Runner's robot. Hoeks added, "The character is nicely disturbed and good and vulnerable that I had to take her on because she just sang to me when I read the script." While that vulnerability isn't visible to the rest of the See characters because they are all blind, viewers are able to see the facial expressions and style choices (including her distinctive crown) that hint at Kane's true feelings about herself, her position as queen, and her violent actions.

Kane's most distinctive physical difference from everyone else in See is her near-shaved head — which was Hoeks' idea for the character. As she told Collider, "For me, [the haircut is] a transformation into two sides of the character. Finding her vulnerability and her loneliness, and on the other hand, finding her strength." While Kane keeps her vulnerability and loneliness private, save for her "prayer partner," her strengths are on display through her brutal (and kind of creative, to be honest) executions of those subjects who betray her. In the show's second episode, for example, she does away with two criminals by suspending them from the ceiling and then electrocuting them. Still,

Queen Kane is far from the only brutal person in the world of See, which begs the question — is Queen Kane a truly violent person, or is she only cruel because that's what the kingdom she's in charge of dictates of her?

If See is a fairy tale, it's a modern and complex one that doesn't draw clear lines between good and evil. Baba Voss is the show's "hero," but he slaughters enemies in horrendously visceral ways, too. Queen Kane may be presented as evil, but her longing for companionship suggests she's simply under duress. While the battle lines of See are clearly drawn at the show's beginning, Queen Kane's conflicted nature could throw a wrench in the plans of her underlings before the series ends.