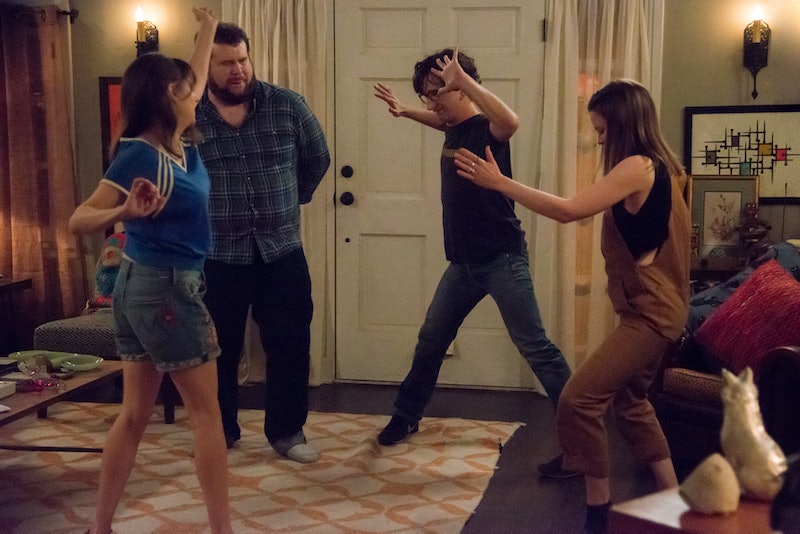 It's been a little over a year since most of us marathoned the entire first season of Love in a single weekend, so with Season 2 now streaming on Netflix, things might be feeling a little foggy. You remember the basics, sure: That the lion's share of the first 10 episodes relished in Gus and Mickey's inability to get on the same page relationship-wise, and that dating as an adult in Los Angeles (or anywhere, really) can be really, really difficult. But how about the rest? Say, for instance, the character of Randy from Love. Does that ring any bells?

Well, as a quick refresher, Randy was Gus' friend — and later in the season, he started dating Mickey's roommate, Bertie. That relationship has continued into Season 2, which picks up right where the Season 1 finale left off, and is sure to be fun to watch — especially given the fact that one of the new episodes features the two couples taking mushrooms together.

As for the actor who plays him? Well, that's comedy veteran Mike Mitchell, who has quite the string of TV credits. You might recognize him from several episodes of talk show parody Comedy! Bang! Bang!, his work on sketch comedy show The Birthday Boys, or perhaps most notably, as Bjorn Lerpiss, the Paunch Burger enthusiast extraordinaire of Parks and Recreation's Lerpiss Family (yep, it's a thing).

In an interview with TV critic Ethan Alter, executive producer Judd Apatow weighed in on the Randy/Bertie storyline. "One of the fun aspects of the second season is exploring [Bertie's] bizarre relationship with Randy, who is played by Mike Mitchell," Apatow said. "We actually get to follow multiple relationships in the second season, and it’s funny, because Randy’s this sweet, but unemployed guy who people aren’t sure about whether he’s a good person to date or not."

For her part, Claudia O'Doherty, who plays Bertie, didn't want to give too much of her character's plot (romantic or otherwise) away in an interview with Entertainment Tonight, but she did say, "In the beginning, things are going — things are on," which is just vague enough to make you want to start watching Love Season 2 right now, if you haven't marathoned it already.