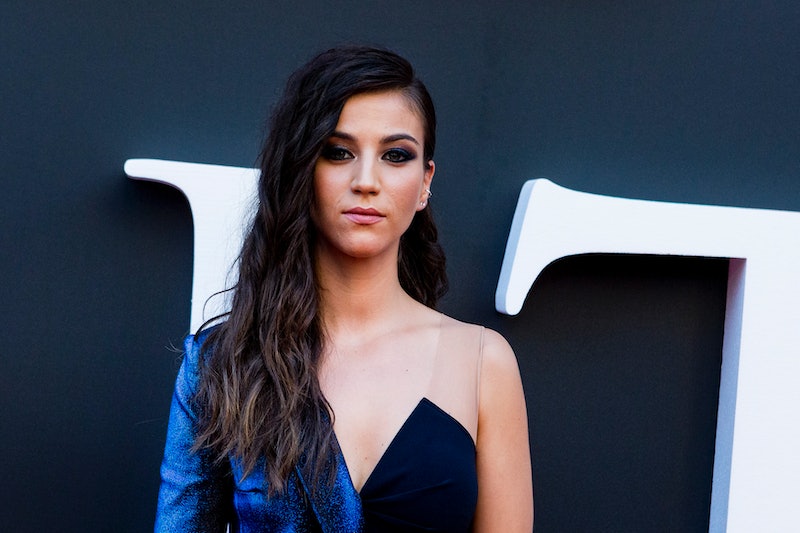 A new school term brings a whole new mystery to Elite Season 2. With a new crime to solve — a missing persons case — and several new characters strutting down the halls of Las Encinas, life's bound to get a whole lot more complicated for Samuel, Nadia, and Christian. Adding to this mix is a student named Rebeca, played by Claudia Salas, who may end up being an ally to Samuel and the other transfer students — or, befitting of the twisty drama, may turn out to be an enemy.

Salas is a newcomer when it comes to acting. According to IMDb, her only other onscreen role before Elite is a TV series called The Plague (La Peste), which has yet to air its second season. The Plague tells the story of a 16th century Seville that's suffering from the bubonic plague, as well as a series of grisly murders. The second season is still filming, but we know the character Salas plays is named Escalante. You can see some of the trailer on Salas' Instagram, where she writes that she's happy to "have had the opportunity to give life to a beautiful character."

Perusing the rest of Salas' Instagram will tell you that she studied acting at Arte 4, a school for dramatic arts in Madrid. According to the school's website, they teach everything from theater and cinema acting to camera training and modern dance. In 2014, Salas posted a photo of the entrance to Arte 4 and labeled it "casa." In 2018, it looks like she participated in a play of A Midsummer Night's Dream, in which she played Hermia. More recently, Salas's Instagram shows her spending time with her Elite co-stars.

As for the character of Rebeca, we don't yet know how involved she'll be in the missing persons case. According to the Elite press conference, Rebeca is an outspoken but stylish working-class girl who teaches Samuel to box. It's not clear why Samuel decides to take up boxing, but it likely has something to do with all the turmoil he's been going through since the last season. Season 1 ended with Samuel stumbling upon the body of Marina and his brother getting falsely arrested for her murder, so he's likely not in a good place right now. Perhaps Samuel turns to boxing as a way to release his frustrations and tune out the rest of the world while he figures out how to vindicate his brother. And maybe Rebeca gets roped into his machinations in the process.

On the official Elite Instagram, Salas is also seen posing with other newcomer Georgina Amorós, who will play Cayetana in Season 2. Cayetana was described at the Elite press conference as a "budding internet icon with 39,000 plus Instagram followers." It's not yet clear if Rebeca and Cayetana knew each other before they attended the same school, or if they become friends while at Las Encinas. Based on the comments on the photo — lipstick and the twinning emojis — one can maybe even assume Rebeca and Cayetana become more than just friends.

All in all, fans will have to wait and see what role Rebeca will have to play in the lives of Samuel and the others. Here's hoping she ends up being an ally rather than an antagonist.

More like this
What’s New On Netflix: 'Stranger Things' & 'Somebody Feed Phil' Return
By Arya Roshanian
'Ghost In The Shell: SAC_2045' Was Only Supposed To Last Two Seasons
By Kadin Burnett
'Heartstopper's Kit Connor Revealed His Hopes For Season 2
By Nola Ojomu and Sam Ramsden
17 Hilarious British Comedies On Netflix
By Sophie McEvoy and Sabah Hussain
Get Even More From Bustle — Sign Up For The Newsletter