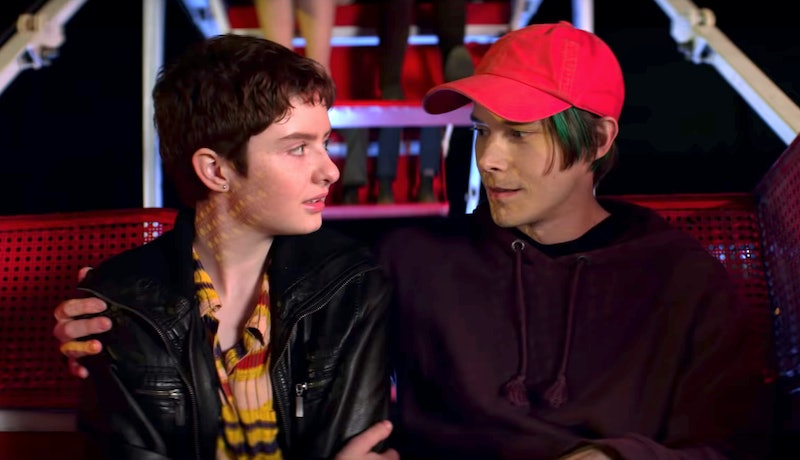 Spoilers ahead for Chilling Adventures of Sabrina Part 3. After two very long seasons spent stuck as the third wheel, Theo finally has a love interest on Chilling Adventures of Sabrina: Robin, played by Jonathan Whitesell. When Robin first arrives in Greendale, he appears to just be a new student at Baxter High, but it's later revealed that he came to town with Professor Carcosa's traveling carnival, which is in actuality a group of Pagan witches in disguise. They're intent on taking down the Church of Night and reincarnating the old Pagan gods, but while Robin initially assists with their plan, he ultimately turns on them and helps Sabrina and the gang run them away.

That's good news for Theo, who quickly sparks up a relationship with Robin. "Theo is still a hot-headed little jerk face," CAOS star Lachlan Watson tells Bustle on a set visit for Part 4. "I still pick fights, it's still the worst and it gets me in terrible situations, but I think having Robin sort of helps balance that a little bit."

Considering Robin decides to stay in Greendale by the end of Part 3, their romance will continue to blossom when CAOS returns. "He's never really had his own roots and he never really had the ability to make true connections. [And now] there's finally an opportunity where he can be accepted," Whitesell tells Bustle. "[There are] lots of opportunities for [Theo and Robin to be] able to open up each other's worlds, because Robin really doesn't know what Greendale is like. He’s been in a traveling carnival and [now he's] just kind of getting introduced."

As for Whitesell, there's a reason those familiar with the Archie comics TV universe will recognize him: he previously appeared on Riverdale as Kurtz, who, despite being in only a few Season 3 episodes, caused a lot of trouble for Jughead as a choker-wearing member of the Gargoyle Gang .

In fact, save for a handful of parts, Whitesell's career has focused largely on the supernatural. He previously had roles on iZombie, The 100, The X-Files, Beyond, The Twilight Zone reboot, and Once Upon a Time. In his spare time, he even creates paranormal-looking artwork, so it's safe to say he should feel pretty at home in Greendale — onscreen and off.