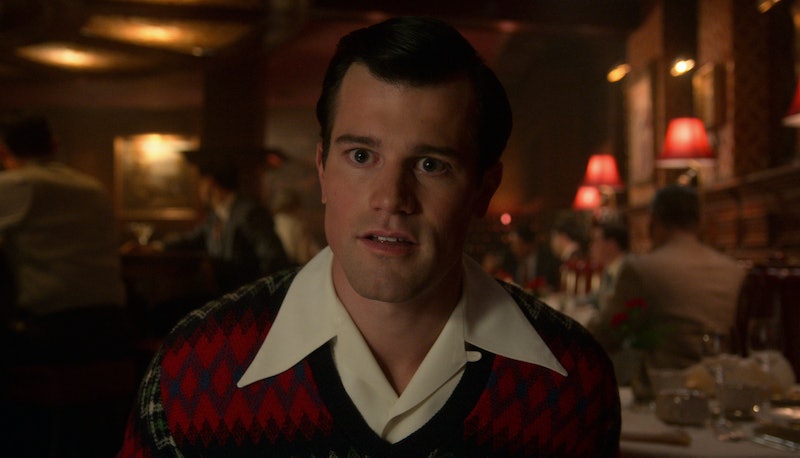 Courtesy of Netflix
By Rebecca Patton
May 1, 2020

Ryan Murphy's latest Netflix show, Hollywood, harkens back to the golden age of show business, following a number of young creatives trying to catch their big break. Among the cast are a number of A-list stars and Murphy favorites, including Darren Criss, Patti LuPone, Queen Latifah, and The Politician breakout David Corenswet. But there are also a few new faces, including Jake Picking, who plays Rock Hudson — one of the few characters explicitly based on a real person.

One of the most popular movie stars of the '50s, Hudson appeared in dozens of films including Giant, Pillow Talk, and Dynasty. He remained closeted throughout his career and died of AIDS-related complications in October 1985, but Hollywood re-imagines a past in which Hudson came out as gay long before the end of his life. "I think that sometimes [Hudson] viewed himself as a villain, because of the secrets that he had to keep," Picking told V Magazine. "[His story] is a tragedy... but I think he was a hero."

To Murphy, Picking was the perfect person to bring that dynamic to life. "I just know that when I sat with Jake, I thought he was so soulful, and he was so emotional about Rock and about how he had been treated in his life," the showrunner told Elle.

Hollywood is one of Picking's biggest roles to date, but you might recognize him from Patriots Day, The Way Way Back, Bad Grandpa, or Alison Brie's Netflix movie, Horse Girl, in which he plays a character with a side hustle as a rapper — something the actor could relate to. "I had always been the loner kid in high school, in my room on Garage Band rapping," Picking told Women's Wear Daily. "I went away for high school and in the dorms, people were rapping. I started getting into that."

He got so into it, in fact, that Picking estimates he made about 50 songs — five of which ended up in Horse Girl. (You can hear one of the tracks he posted on Instagram).

Now, Picking is ready to dive into more serious roles. "I'm hoping to delve away from some of the younger stuff that I've done previously," Picking said, adding that Hollywood feels like a turning point. "I can definitely sink my teeth into it."