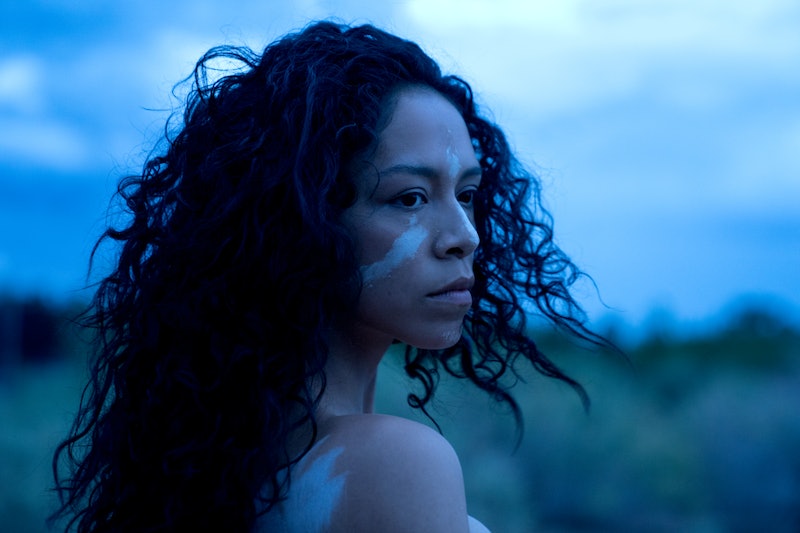 Netflix's Chambers may be top-lined by two household names — Uma Thurman and Tony Goldwyn — but they might not be the only ones you can't take your eyes off of. It's freshman actress Sivan Alyra Rose, who plays Sasha on Chambers, that you really won't be able to stop watching. She stars as a high schooler who has a heart attack and a subsequent heart transplant. Of course, this is a horror show, so there's much more to the story.

After recovering from her surgery for a few months, Sasha begins having dark, cryptic visions and seeing the memories of her donor — another local teen named Becky Lefevre who died in a tragic freak accident. Soon, she meets Becky's family, a wealthy, buttoned-up group who seem kinda weird, but mostly heartbroken over the loss of their daughter. The more entangled Sasha becomes in their lives, though, the stranger things get. Something is amiss here, and Sasha better figure it out before whatever happened to Becky happens to her, too.

As for Rose, she's an Apache and Puerto Rican actress from Arizona, according to her IMDb page. She appeared on a show called Celebrity Page as herself earlier this month, and had a part in a short film called Running Shadow as Jemma, but other than that, Chambers marks her first big (and really only) role.

According to Native News Online, Rose grew up in Arizona on the San Carlos Apache Reservation. The 19-year-old wanted to be a model, but when she got a card from casting director Rene Haynes, she opted to try her hand at acting instead. From there, things moved quickly. "I did not move to Los Angeles to chase my dream, but once there, I emailed Rene to see about getting some auditions," Rose told Native News Online. "I failed at some, but within six months, I got the role to play Sasha." That's a pretty good track record for someone just starting out.

Outside of her acting career, Rose seems like a normal teen. Her Instagram is full of selfies, fun with friends, and now, pictures of her at premieres. She also seems to be very into fashion and beauty, and often posts photos of her posing in edgy clothes and showing off freshly manicured nails. Plus, she's really got the Chambers aesthetic down — there are more than few creepy pics on her feed.

Chambers may be Rose's first big break, but she seems destined for stardom. See her in the show when it hits Netflix on April 26.