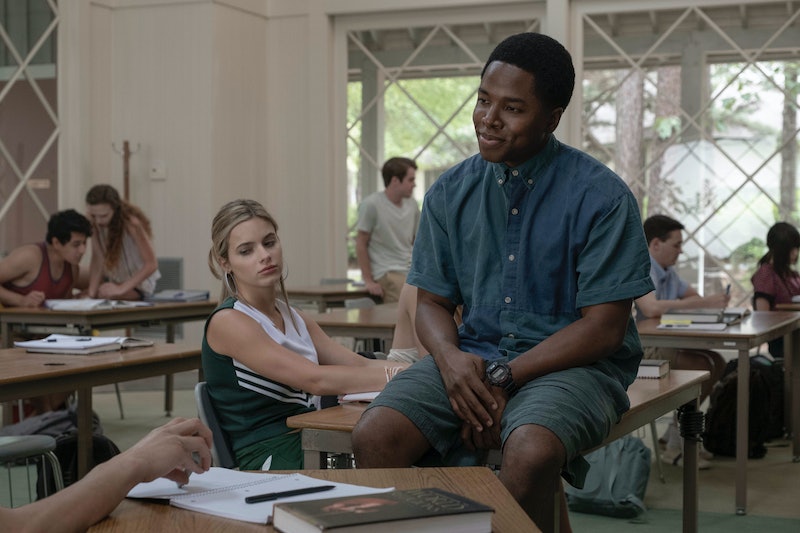 John Green's book Looking For Alaska follows a group of teens at a boarding school who all come from relative places of privilege, except for Chip, aka the Colonel, played by Denny Love in the new Hulu series. The Colonel grew up in a trailer home with his mother and without much money, but is determined to provide a good life for his mom and someday buy her a house — something Love said he really respected about the character. "He's doing all of this stuff. He moved away from home, going to school with all these kids that don't look like him, that are not relatable to him," Love told Hollywood Life. "He's kind of alone in that way, just to provide a better life for a woman he loves and cares about."

The Colonel's relationship with his mom is a big part of his backstory, but his character in the novel also stands on his own. He takes charge of the group — including his new roommate Miles and good friend Alaska — giving them all nicknames and cooking up pranks at school. It seems like it would be a fun role to play, and Love was thrilled to get the chance to take on more of a leading character. Previously, he'd had smaller parts on shows like Empire, Chicago P.D., and Lucifer, but Looking For Alaska was his first major role since he started acting in 2015.

According to Love, he actually manifested the part. "I was really just hoping and praying to be on a TV show ... I believe in manifestation, so I was writing down for months, 'I’m going to book a TV show. I'm going to book a pilot.' I just kept writing it down every single day for like two, three months," Love told Hollywood Life. Eventually, he booked Looking For Alaska, which he hadn't realized was based on a novel. Once he learned that, he raced out to read it and fell even more in love with the Colonel.

"I understood him. I felt like we had a lot in common because I remember when I was that age I was angry," Love continued. "I went to a school that had a lot of kids who, in my eyes, had better lives than me and dealing with feeling like an outcast and dealing with a lot of the things that the Colonel deals with in the show." He added, "I just understood his perspective on a lot of things. I don't necessarily agree with his methods, but I understood why he felt the way he felt about things."

Love said he also connected with the Colonel's love for his mom, because Love was also raised by a single parent — in his case, by his grandmother. That special relationship between the Colonel and his mother will be further explored in the show, and Love said the dynamic will be an interesting one to watch. "[The Colonel] is a leader and that comes from having a strong person in your life. With his mom, it's one of the first times you see the Colonel being a little more submissive," Love said to Hollywood Life. "She's one of the people in his life that can put him in his place, which you don't really see at school ... so you get to see a lot of that and then you get to understand his motives."

Variety's Caroline Framke praised Love's performance in her review of the show, writing "Love in particular makes an immediate and lasting impression as the Colonel ... In the latter episodes, after the tragedy has well and truly struck, his furious grief is a blaze that lights up the screen." But even with rave reviews like that, Love told Entertainment Weekly that some moments on set were challenging for him.

"Day one was the toughest day because it was overwhelming," Love said. "It was the first time I had been on set, met the crew, a lot of the cast." He said his nerves were exacerbated by seeing John Green on set and realizing he was going to have to say his lines in front of the man who wrote the story. In fact, he was so nervous that he ended up messing up a scene: when he was supposed to write "coffee table" on a piece of tape, he misspelled it "tabel." But the mixup actually helped calm him down. "Once I got that out the way, it can't get no worse! I just spelled 'tabel' in front of John Green, so at that point, I was like, 'We'll be OK. We'll be fine,'" Love said.

Based on that Variety review, Love was obviously able to get over his first day jitters, remember how to spell "table," and deliver a slam dunk performance. For a first major TV role, this is the project to get and the way to do it.