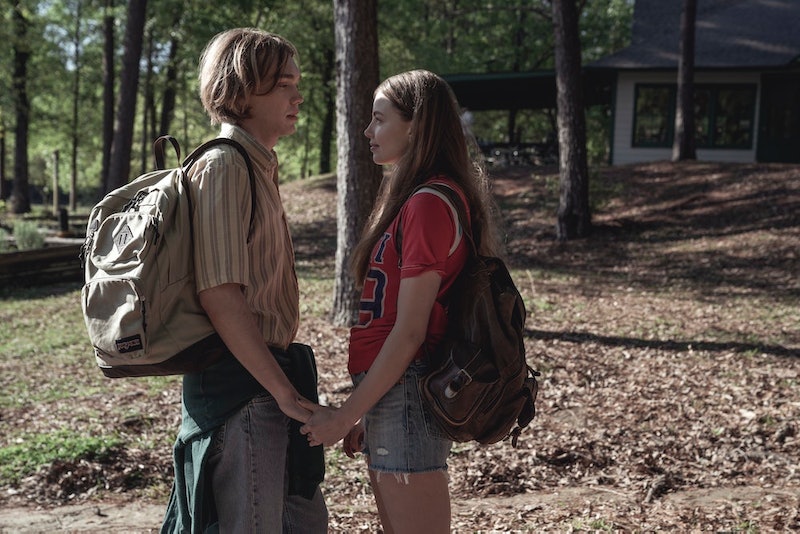 After more than a decade of waiting, John Green fans are finally getting their first look at Alaska — along with Pudge, The Colonel and Takumi Hikohito. On Friday, July 26, Hulu released the first trailer for Looking For Alaska, featuring some of the book's most iconic lines, including Miles (Charlie Plummer)'s motto about going to "seek a great perhaps."

Looking For Alaska — which premieres on Hulu on October 18 — centers around Miles "Pudge" Halter, a new student at Culver Creek Prep boarding school, as he falls in love with Alaska Young (Kristine Froseth), a rebellious and impulsive girl who he meets on campus. However, Miles and Alaska's potential romance hits a snag after a mysterious tragedy rocks his world, and Miles and his two best friends — the fast-talking, prank-loving Chip "The Colonel" Martin (Denny Love) and DJ Takumi Hikohito (Jay Lee) — attempt to "make sense of what they've been through," according to the official synopsis.

The first trailer for Looking For Alaska plays up that mysterious vibe, featuring slow motion shots of the characters in the woods of Alabama, with voiceovers of some of the book's most famous quotes. "Teenagers think they’re invincible," Alaska says, as the trailer cuts between a shot of her walking between the trees and the petals falling off flowers. "They don’t know how right they are."

In addition to following in the footsteps of the other adaptations of Green's books — including The Fault in Our Stars, which made Ansel Elgot into a star and Paper Towns — the Hulu adaptation of Looking For Alaska has some impressive teen drama pedigree. The limited series will be helmed by Josh Schwartz and Stephanie Savage, the producing duo behind such iconic TV shows as Gossip Girl and The O.C.

Deadline first broke the news about a TV adaptation of Looking For Alaska back in May 2018, where the outlet explained that Schwartz and Green had been working to bring the story to the green for 13 years. A few months later, in October 2018, Green announced that Froseth and Plummer had been cast as Alaska and Miles, respectively on social media, and gave the two actors his seal of approval.

"I spoke to Kristine and Charlie on the phone yesterday and it was really special to have a conversation with the people who will become Miles and Alaska," the author wrote on Twitter. "I'm so grateful to them and to everyone involved with the Looking for Alaska series. It's all starting to feel very real!"

Before brining Alaska to the small screen, Froseth also starred in Sierra Burgess Is A Loser, opposite Noah Centineo and Shannon Purser, where she proved that she knows how to bring empathy and depth to her characters — which will come in handy, considering the fact that the boys learn that there's a lot that Alaska has been hiding from them over the course of the story. Plummer, also a newcomer to Hollywood, previously starred opposite Michelle Williams and Mark Wahlberg in All the Money in the World, as well as Lean on Pete and Boardwalk Empire.

The cast of Looking For Alaska will be rounded out by Timothy Simons as the no-nonsense dean, Mr. Starnes; Sofia Vassilieva as Lara Buterskaya, Alaska's friend and Miles' ex-girlfriend and This Is Us star Ron Cephas-Jones.

While the first trailer might leave viewers with more questions about what happens to the students of Culver Creek than answers, it's clear based on this first clip that fans have finally found what they've been searching for in Looking For Alaska.

More like this
Netflix Shut Down 'Bridgerton' S3 Rumours About A “Very Dark” Storyline
By Bustle
Everything To Know About The 'Daisy Jones & The Six' TV Series
By Maxine Harrison and Brad Witter
The Song At The End Of 'The Last Of Us' Ep 1 Has A Deeper Meaning
By Sophie McEvoy
'Wednesday' Star Emma Myers Thinks A Wenclair Storyline Is “Possible” In Season 2
By Alyssa Lapid
Get Even More From Bustle — Sign Up For The Newsletter
From hair trends to relationship advice, our daily newsletter has everything you need to sound like a person who’s on TikTok, even if you aren’t.