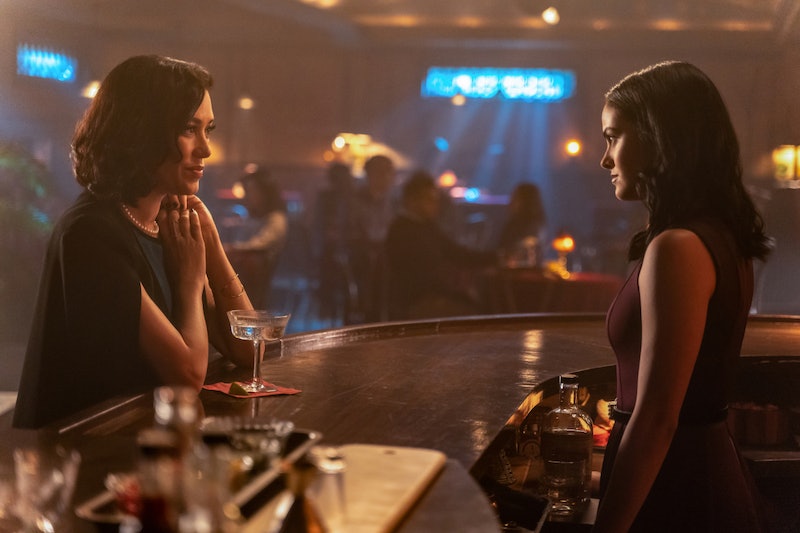 Veronica and Hiram Lodge's tense father-daughter dynamic is about to get even more complicated. Riverdale's Nov. 6 episode marks the arrival of Veronica's sister Hermosa, played by Mishel Prada. And from the sounds of things, it will only mean more trouble for their family.

According to TV Guide, Riverdale creator Roberto Aguirre-Sacasa described Hermosa as "just as scheming" as Hiram during the show's New York Comic-Con panel in October. "She's just like daddy, but a woman so more dangerous," he said.

The showrunner went into more detail during an NYCC roundtable, explaining that Hermosa lives in Miami, where she's been running nightclubs just like her sister. "[Hermosa is] the apple of Hiram's eye — the other apple of Hiram's eye," he told Bustle.

But while Veronica and Hermosa have a lot in common, their similarities will prove to be a point of contention. "One thing we haven't seen with Veronica, because she's been an only child, is sibling rivalry," Aguirre-Sacasa said. "So that will be really, really fun to play."

Mark Consuelos, who plays Hiram, echoed these sentiments, sharing that Hermosa was from a previous relationship, which means she's older than Veronica. "She's fiercely loyal to Hiram," he said during the same roundtable. "Almost the opposite of Veronica. They have a good relationship."

As for Prada, she's had a handful of roles — most notable of which was in Fear the Walking Dead — but is best known for playing Emma Hernandez in the acclaimed Starz drama Vida. Aguirre-Sacasa explained at NYCC that he's friends with the series' showrunner, Tanya Saracho, which led him to cast Prada in Riverdale.

Like Hermosa, Prada grew up in Miami. She comes from a family of immigrants, and while she told Women's Wear Daily she "very much associate[s] with being an American in a lot of ways," she was excited to hear that a show like Vida — which follows two Mexican-American siblings — was being made. "Any time through art that we can give another person a sense of being and a sense of belonging, that creates something that isn't just us...it creates an energy and a love and hopefully gives people something to latch onto, and to feel seen," Prada told WWD. "It's building a bigger table that we can all sit down at and eat some burgers and tamales."

Unfortunately, it doesn't seem like Hermosa and Veronica will be bonding over burgers and tamales anytime soon.

More like this
'The Queen’s Gambit' Season 2 Tweet Wasn’t From Anya Taylor-Joy
By Mary Kate McGrath, Jack Irvin and Grace Wehniainen
Netflix Shut Down 'Bridgerton' S3 Rumours About A “Very Dark” Storyline
By Bustle
Everything To Know About 'Only Murders In The Building' Season 3
By Gretchen Smail and Kadin Burnett
Ashton Kutcher Wants Danny Masterson “To Be Found Innocent” In Rape Retrial
By Jake Viswanath
Get Even More From Bustle — Sign Up For The Newsletter
From hair trends to relationship advice, our daily newsletter has everything you need to sound like a person who’s on TikTok, even if you aren’t.