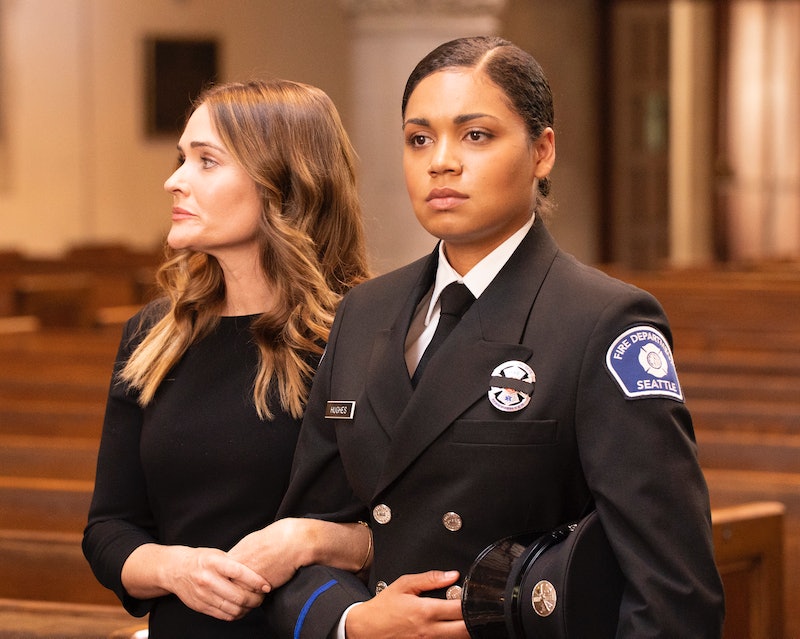 Because Station 19 takes place in the same city as Grey's Anatomy, there's a ton of crossover potential. There's another mini one slated for the Season 16 premiere, according to the trailer, because Station 19's Vic searches for Jackson Avery on Grey's Anatomy. At the end of last season, Jackson went missing in the woods during the intense fog storm and now he's nowhere to be found. With firefighter Vic on the case, he will hopefully be found soon. For viewers who don't watch Station 19, Victoria "Vic" Hughes is played by Barrett Doss. Even if you haven't seen her on Station 19, you probably have seen her somewhere before.

According to her IMDB, Doss started her acting career in 2013, playing Liz Lemon's great-granddaughter on 30 Rock. That's quite a show to have be your first entry into the industry. From there, Doss had small parts on TV shows like Person of Interest, Bull, and HBO's Girls. Her small screen big break came when she landed the role of the assistant Megan on the first season of Netflix's Iron Fist and recurred in seven episodes. (It wasn't her first time playing a character named Megan either. That was the name of her role in two episodes of Kick.)

Doss didn't return for the second season of Iron Fist, but her career showed no signs of stopping. She was then cast as the lead Rita Hanson in Broadway's Groundhog Day musical where she showcased both her acting and musical talent. You can watch a clip of her singing below:

Now Doss plays Vic on both Station 19 and Grey's Anatomy when the shows do joint episodes. Previously, crossovers were treated as huge, special events for the two shows, but they're going to become a more normal, regular thing on the two series for Season 16.

Deadline reported that Grey's Anatomy showrunner Krista Vernoff is now the Station 19 showrunner as well. Her goal is to weave these two stories a little tighter than, say, past spinoffs like Private Practice. Deadline reported that characters will go back and forth between the two shows more often and similar storylines will play through both series to result in what are essentially two hour episodes of Grey's Anatomy/Station 19.

Deadline added that, at the ABC Upfronts in May, ABC Entertainment President Karey Burke said, "People can expect crossover event[s] between these series every week."

That doesn't always mean that Vic will be the character crossing over. There are many firefighters and doctors that can go back and forth between the shows. Firefighter Ben Warren and Doctor Miranda Bailey make the most sense as frequent crossover story options, since they're married. But maybe Grey's will also bring back the Station 19 firefighter who hit on Maggie during one of the previous crossover events.

In any case, it's a good thing that fans are getting to know Barrett Doss now, because they may be seeing a lot more of her in the weeks and episodes to come. Now if only Station 19 and Grey's Anatomy could do a crossover musical episode she could show off her musical chops...

More like this
Meet The New Team Of Residents Joining 'Grey's Anatomy' In Season 19
By Brad Witter and Sophia Moore
Megan Thee Stallion Actually Auditioned To Be This 'P-Valley' Main Character
By Radhika Menon
What's New On Netflix: A Third '365 Days' Movie & Lili Reinhart’s New Film
By Arya Roshanian
'Stranger Things' Season 5 Will Echo Season 1 In A Key Way, The Duffer Brothers Confirm
By Kadin Burnett and Sophie McEvoy
Get Even More From Bustle — Sign Up For The Newsletter