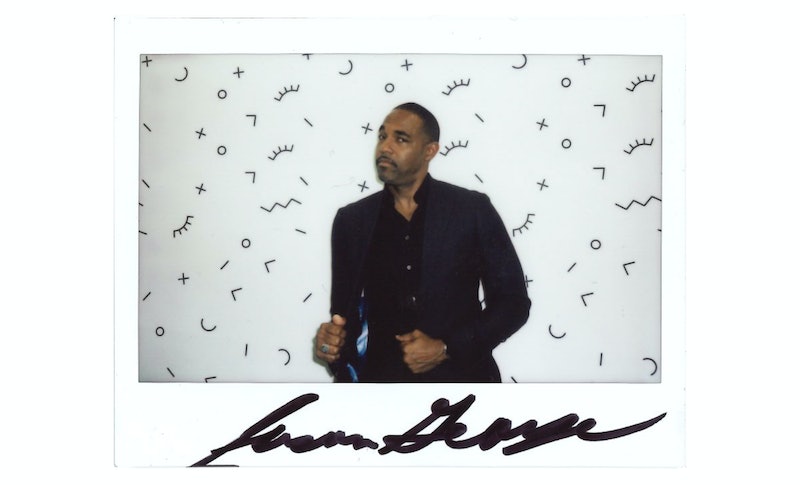 When celebrities hang out with Bustle editors, we want to give them the chance to leave their mark. Literally. So we hand them a pen, a piece of paper, a few questions, and ask them to get creative. The rest is up to them. This time, Station 19 star Jason George is leaving his mark in the Bustle Booth.

Being a regular cast member on a Shonda Rhimes show like Grey's Anatomy is definitely a dream job for many actors, but given the showrunner's penchant for wild twists, it also means you're always just one devastating season finale away from becoming a TGIT relic. So it's understandable that when Jason George was initially approached by Rhimes and co-creator Betsy Beers during his Grey's run to have a serious-sounding talk, he immediately had one thought: "Am I dying?" he laughs.

Luckily, that conversation was actually an offer to expand the Grey's universe through his character Ben Warren into the realm of firefighting, something that was a bit surprising to both fans of the show and his onscreen wife, Miranda Bailey (Chandra Wilson). George tells Bustle that he was bummed that his character would be moving to the fire station after working so hard to become a doctor for eight years.

"Then there’s this Ben and Bailey relationship, and I was worried about how that would play out," he adds. Ultimately, though, he realized their long-running relationship would be the "connective tissue" holding the two shows together. And there will be more crossovers going into Station 19's second season, George promises, slyly noting that Miranda and Ben aren't the only two people who know each other between the hospital and the fire house.

But just because relationships might be forged among their respective co-workers doesn't mean that it will be a smooth ride for Bailey and Ben. She's still not too pleased that he chose this line of work, after all. It sounds like they'll work through it as George says that he and his "work wife," as he calls her, always tend to find a way. "I think Ben and Bailey are going to continue to go deeper — I’m a Navy brat, so I’m used to knowing what it’s like to have family members [be in the line of danger]. It’s never a feeling that gets solved, it’s something that gets managed," George says. "There are more levels to that this season."

Exploring these long-term relationships is one of the draws of working with Rhimes and her writing teams for the actor. "It's real life people stuff," George says. That, and the fact that her projects feature such diverse casts and female leads, such as George's co-star Jaina Ortiz, who plays Andy on Station 19.

As the chair of the SAG-AFTRA Diversity Advisory Committee, that matters to him more than knowing how long Rhimes will keep his character around. George tells Bustle that he got into the union because of an experience on an unspecified set, when he saw a white man having his skin painted with dark makeup in order to act as his stunt double. He says he was told they couldn't find a person of color for the job.

By working on the Diversity Advisory Committee and starring on shows with diverse ensemble casts like Grey's and Station 19, George is doing his part to push for more representation onscreen. "The needle has moved by and large in all facets [when it comes to diversity in Hollywood] — it’s just not where it needs to be yet," he says. "'Better' does not mean 'done.'"

Being known as a "classy brother who cares and speaks" is one of Jason George's best character traits, as he notes in his Bustle Booth. Check out the rest of his answers — including what to expect from Station 19 Season 2 in emoji form — below.

More like this
'Grey's Anatomy's New Intern Got Advice From Dr. Bailey Herself
By Grace Wehniainen
On 'The Handmaid’s Tale,' Christine Ko Fights Back
By Gretchen Smail
Lauren Lyle Bustle Booth
By El Hunt
Jason Derulo Is Launching A New Singing Show In The UK
By Maxine Harrison
Get Even More From Bustle — Sign Up For The Newsletter