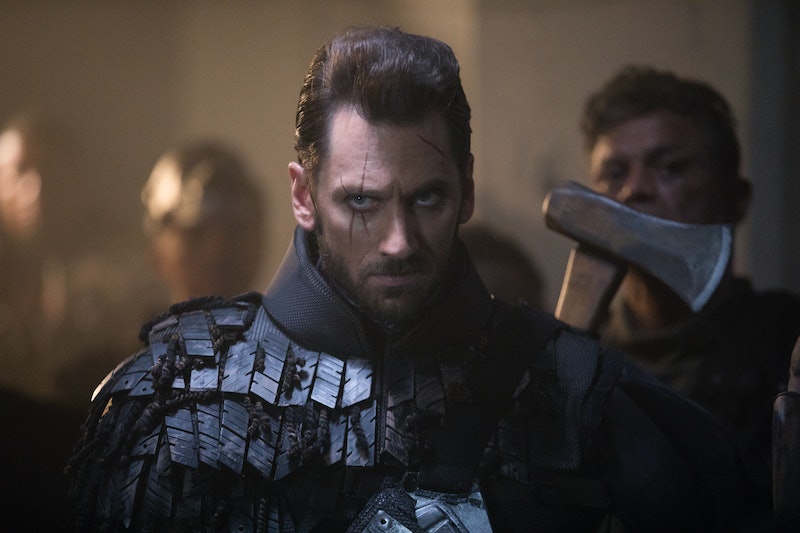 There's a lot of star power behind Hulu's Future Man. Josh Hutcherson (aka The Hunger Games' Peeta Mellark) leads as the show's gamer-turned-world guardian protagonist, and it's executive produced by powerhouse filmmakers Seth Rogen and Evan Goldberg. But what about the less recognizable names on the cast list? Who plays Wolf on Future Man, for example?

That role comes courtesy of Derek Wilson, an actor who may be a fresh face to some, but certainly has his fair share of credits. According to his Hulu bio, he started his career in theater, appearing in productions including Anna Christie, Henry IV, and the Broadway revival of Macbeth. Around 2008, he began landing on-screen parts, nabbing episodic stints in The Good Wife, Person of Interest, and Rectify. He landed his first big TV gig in Season 1 of Preacher — also produced by Rogen and Goldberg — in which he portrayed Donnie Schenck, a Civil War re-enactor who often got into altercations with the titular preacher, Jesse Custer.

In Future Man, Wilson's character is described by Hulu as "a futuristic Resistance foot soldier" from the year 2162. As a time-traveler who's been fighting to protect humanity for decades, he's become desensitized to violence and emotion, and has instead grown into a gruff, destructive warrior with a knack for blowing things up. He's ruthless, savage, and lacks hygiene and interpersonal skills, but is fiercely allegiant to his partner, Tiger (Happy Endings' Eliza Coupe).

Together, he and Tiger crash land in Josh Futturman's (Hutcherson) bedroom to inform him that The Biotic Wars — a video game he's been playing — is actually a recruitment tool sent back in time to find the one person capable of saving the world from an imminent super-race invasion. As the first and only person to beat it, Josh is the ill-equipped hero tasked with the job, and as it turns out, the clinic where he works as a janitor is ultimately responsible for the end of civilization. The only way to save everyone is to either kill the creator of a herpes cure being developed there, or go back in time to make sure he never gets herpes in the first place. Cue a sequence of wildly inept combat and '80s-themed hilarity.

Wolf has no faith in Josh's ability whatsoever, but as he discovers the delights of the modern world, it's actually his commitment that's called into question. From the sounds of it, though, he'll eventually soften, perhaps giving the trio a chance to pull off their half-baked mission. As Wilson told Too Fab over the summer:

"The cool thing about the show is [that] we really have a connection. The characters really care about each other. It's not just comedy for comedy's sake. The stakes are real ... There's a real heart to it."

As a whole, the series seems to fall in line with the rest of Rogen and Goldberg's output, blending raunchy comedy with outrageous, plot-driven action. It also retreads their fascination with end-of-the-world disaster stories (See: This Is The End, and, to an extent, Sausage Party), and doesn't make any apologies for doing so. "It keeps drawing us," Rogen told TV Guide in July. "Since humanity [has] the ability to wipe itself out in a few seconds, it is something we keep coming back to, probably because it seems the world could really end."

Unlike other Hulu originals, Future Man will drop all of its 13 episodes in full, rather than spreading them into a week-to-week format. That bodes especially well for Wilson's character, since you'll be able to watch his evolution from hardened defender to slightly less heartless team player in one fell swoop. Catch him in action when Future Man premiers Nov. 14.