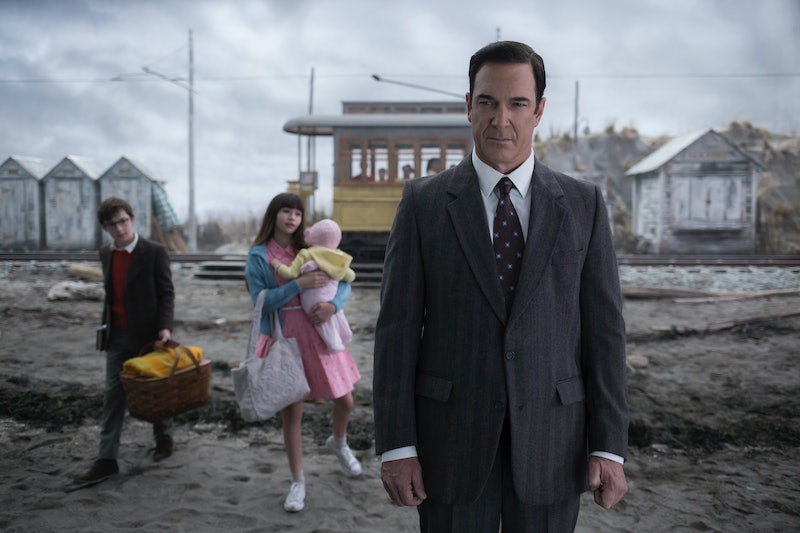 Much like the brilliant book series it's based on, Netflix's A Series of Unfortunate Events certainly lives up to its name — it's a seriously hard-knock life for orphans Violet, Klaus, and Sunny Baudelaire, who are passed from one sinister, bumbling guardian to the next after their parents perish in a fire. Although it's not the only case of arson in the series, this first "unfortunate event" is the catalyst for everything that ensues — and it's a mysterious one. So, who set the Baudelaire mansion on fire in A Series of Unfortunate Events? Spoilers for Season 1 and the book series ahead.

Although it's never confirmed or shown onscreen, it's heavily implied that Count Olaf set the fire in order to execute his sinister plan of getting his hands on the family fortune. In the immediate aftermath, he strolls into the bank and describes himself to the bank teller as the Baudelaire children's "closest living relative." (Apparently proof of relation is not required.)

In the aftermath of the fire, Klaus finds the spyglass which links his family to the ever-mysterious V.F.D. (Volunteer Fire Department) and it appears that Count Olaf is related to the Baudelaires through the organization — not by blood. It's also implied that there's a strong connection between Lemony Snicket and Beatrice, so all roads circle back to Count Olaf and Lemony Snicket —they're even shown in a photograph together at Prufrock Prepratory School in the final moments of the series finale.

It doesn't seem like a coincidence that the Baudelaire parents sent the children to Briny Beach on the day of the fire — they likely knew they were being targeted, and their apparent history with Count Olaf lends further credence to the theory that he set the fire. And, he may not have been motivated solely by money — in the books it's suggested that Beatrice and Bertrand killed his parents. So, although he definitely has his eye on the family's money, Count Olaf may have more than one motive. When the Baudelaire children confront him with their allegations in The Penultimate Peril (the twelfth book in the series), Count Olaf gives a characteristically ambiguous response: "Is that what you think?"

Although Count Olaf is definitely the most likely candidate, let's keep an open mind — because another suspect is Lemony Snicket himself. Although this theory hasn't been explored in the Netflix series yet, it's addressed in the book The Carnivorous Carnival. One of Lemony's dedications reads: "For Beatrice — Our love broke my heart, and stopped yours." It's not an admission of guilt, but it's certainly suspicious.

The plot thickens even more when the last episode introduces viewers to the Quagmire children — students at Prufrock Preparatory School whose parents also perished in a fire. (It turns out that "Mother" and "Father" aren't the Baudelaire parents — they're the Quagmires.) That's not the only thing they have in common — the Quagmires are in possession of the other half of the mysterious spyglass and their parents were also members of the Volunteer Fire Department. The Quagmire mansion was also set on fire, presumably by Esme Squalor, who is Count Olaf's girlfriend in the books.

So, although I'm not ready to rule out Lemony Snicket entirely, it seems like the most plausible scenario is that Count Olaf and Esme Squalor made a coordinated effort to burn down the mansions of wealthy families and use their orphaned children as a way to get their hands on the kids' hefty inheritances.

In the book series, readers were never given a concrete answer about who set the Baudelaire fire — and, considering the Netflix version has stayed very true to the books, it seems like viewers will still be theorizing even after the series finale has aired.