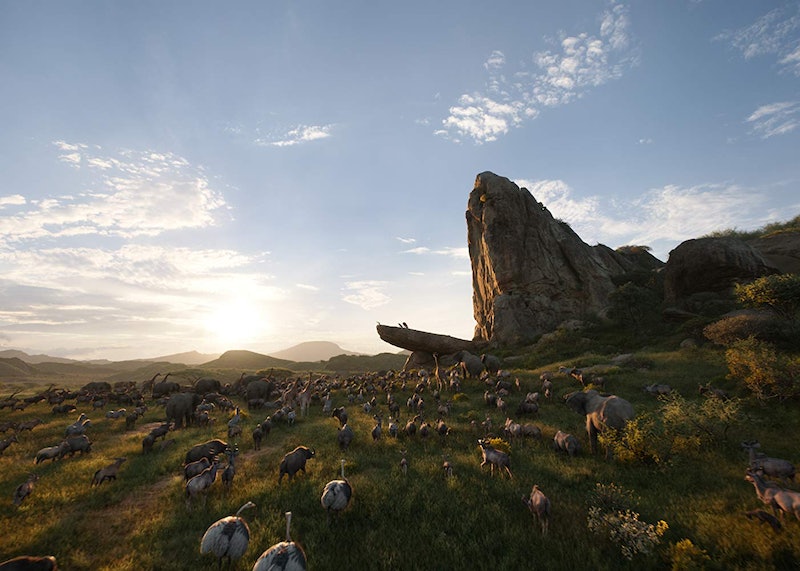 The Lion King reboot, which premieres in theaters on July 19, gives the Disney original film a whole new photorealistic look new star-studded cast, and original motion picture soundtrack that features both new songs and re-imagined classics. In the film, you'll easily recognize the song stylings of Donald Glover (Simba) and Beyoncé (Nala), but you may not be quite as familiar with another golden-voiced talent who performs what is arguably the number that's most frequently associated with the Disney musical. The new "Circle of Life" is sung by Broadway actor Lindiwe Mkhize and South African composer and artist Lebo M., and it's just as magnificent as the original version.

This isn't the first time either singer has been involved with the The Lion King franchise. South African singer and actor Mkhize played Rafiki in the West End stage production of The Lion King from 1999 to 2012, and also performed during their production's US tour in 2002.

South African artist Lebo M. is reprising his role from the 1994 film, in which he also sings the iconic opening lines of the movie's first song. Per Billboard, Lion King composer Hans Zimmer specifically requested to work with Lebo M. on music for the original film. Lebo M. also contributed existing and new compositions to The Lion King stage musical; and composed and performed music for Lion King movie sequels.

He sang "Circle of Life" with vocalist Carmen Twillie for the soundtrack to the 1994 film, and evidently nailed his performance right away. "So what most people don’t know is, that first note you hear in The Lion King that I’m singing, is actually the first and only take that was ever done," he told South African weekly newspaper Mail & Guardian.

Mkhize has yet to give interviews about her role in The Lion King, save a TMZ video of her singing Lebo M's introduction to "Circle of Life." In the video, she tries to teach the cameraman the Zulu words, "Nants ingonyama bakithi Baba."

For now, fans can get to know Mkhize better through her personal Instagram account. She's posted several photos from The Lion King London premiere red carpet, including photos with her collaborator Lebo M. She's also posted a photo with composer Hans Zimmer, who rearranged "Circle of Life" for the photorealistic version of the Disney classic.

The new "Circle of Life" and as well as other tracks include some returning talent. During the Lion King press conference on July 16, per Oh My Disney, Zimmer said that he began to think about the new version of the film's music at 2017’s Coachella, when he brought a host of musicians together — a lot of whom were part of the 1994 Lion King — to perform songs from the film live. Zimmer then brought back many of those same musicians for a recording session in front of the filmmakers, including Lebo M. "The greatest gift is being able to reenter this journey that’s been in my life for 25 years. This is like a family reunion," Lebo M. said during the same press conference.

Already in the family via the stage musical, Mkhize is now also part of the story's cinematic legacy, along with the artist who made the opening moments of the animated film as epic and beautiful as it is.

More like this
12 Years Ago, Austin Butler Manifested His Oscar Nom In This Disney Movie Scene
By Jake Viswanath
Britney Spears Shares & Deletes Photos Of Justin Timberlake From 22 Years Ago
By Jake Viswanath
Jennifer Coolidge Recites “Jenny From The Block” Beside J.Lo In Her First TikTok
By Jake Viswanath
Cruz Beckham Teased New Music With An Adorable Nod To Mom Victoria Beckham
By Stephanie Topacio Long
Get Even More From Bustle — Sign Up For The Newsletter
From hair trends to relationship advice, our daily newsletter has everything you need to sound like a person who’s on TikTok, even if you aren’t.