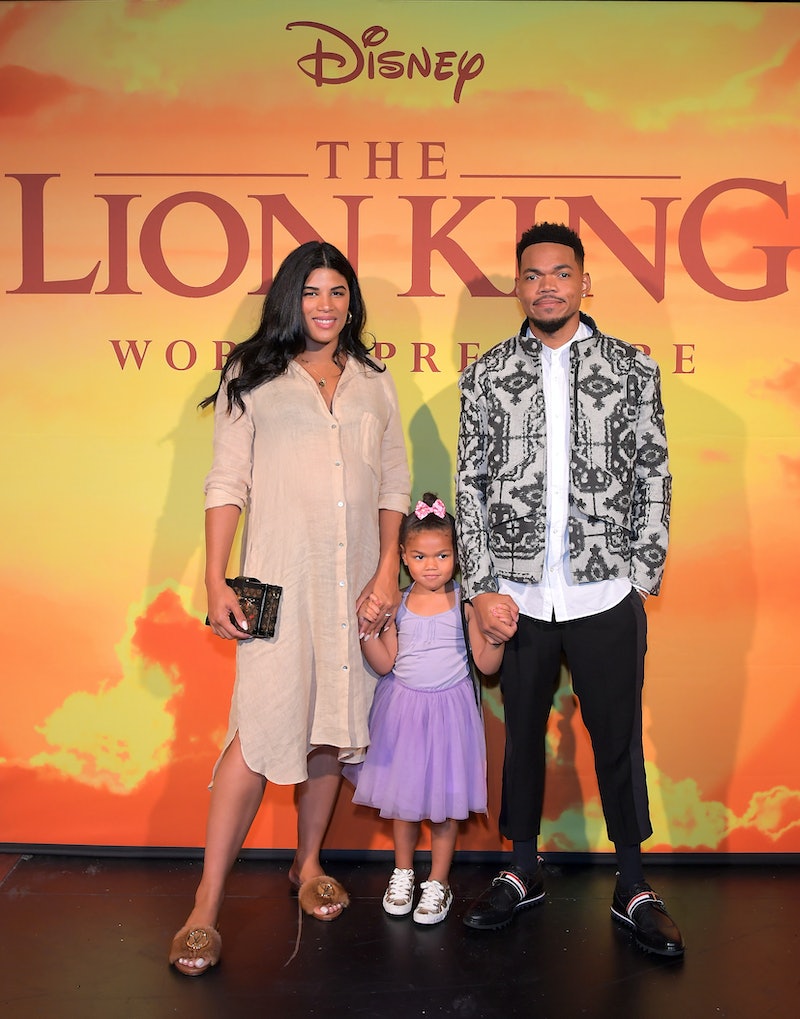 Thanks to Beyoncé and Donald Glover, the live-action Lion King remake is already full of hip-hop royalty and now, it appears it's getting even more crowded. Chance The Rapper has a Lion King cameo that no one knew about until now. And it's a part he says he got all thanks to Glover.

After attending The Lion King premiere in Los Angeles with his wife, Kirsten Corley, and his three-year-old daughter, Kensli, Chance took to Instagram to announce his small role in the movie directed by Jon Favreau with a short story. Turns out, his part in the film isn't actually all that small at all.

"I grew up my whole life obsessed with all things related to #TheLionKing; like all three films, the Timon and Pumbaa tv show, the broadway play and especially the broadway soundtrack," he wrote. "Needless to say the original film was immensely impactful on my music and overall life. So when my big bro Donald got casted as Simba, he did the coolest thing ever and told director Jon Favreau to call me in as a consultant to keep the original flavor."

Chance (real name, Chance Bennett) explained that "for about a year" he was able to go into the studio and get a behind the scenes look at the making of the new Lion King. He was able to see the animation and the music direction and eventually, those visits paid off in a big way. "One day I’m there Jon asked me to do some singing stuff, another day he asks me to do some lines," he wrote on Instagram. "Its all a blur, but I’ll tell u its one of the best blurs of my whole life. I am so blessed to know people like Donald and Jon man."

Along with this announcement, Chance posted a series of photos from the premiere, including one with Queen Bey and Blue in their matching sparkly outfits and another with his family on the red carpet. Most importantly, though, Chance revealed he's playing "Bush Baby" in the movie so fans can keep their eyes and ears open for him.

Of course, all eyes will likely be on Beyoncé, who plays adult Nala in the film. Like, Chance she's not only acting in the movie, but singing, too. While fans have already heard her version of "Can You Feel The Love Tonight," on Tuesday (July 9), Bey dropped the new track "Spirit," which will be featured on The Lion King soundtrack.

It also seems to solve the mystery of the untitled Beyoncé track on the soundtrack, which Favreau told Fandango, is a "song that she performed and wrote in the spirit of the production along with working with Lebo M., who’s part of it with Hans Zimmer." While not confirmed that "Spirit" is the mysterious TBA track, the lyrics seem fitting for a song that Nala would sing to Simba, in hopes that he'll come back to the pride. "Watch the heavens open/Spirit, can you hear it calling?," she sings.

Fans will have to wait and see how "Spirit" fits into the film. Not to mention, where else Chance The Rapper might pop up.

More like this
Anne Hathaway Shared A "Thrilling" 'Princess Diaries 3' Update
By Darshita Goyal
Reese Witherspoon Confirms This Fan Favorite Will Return For 'Legally Blonde 3'
By Jake Viswanath
Taylor Lautner Copped To Finding Jacob "A Little Annoying" In Twilight
By Stephanie Topacio Long
James Cameron May Come To Regret His 'Titanic' Door Experiment
By Stephanie Topacio Long
Get Even More From Bustle — Sign Up For The Newsletter
From hair trends to relationship advice, our daily newsletter has everything you need to sound like a person who’s on TikTok, even if you aren’t.