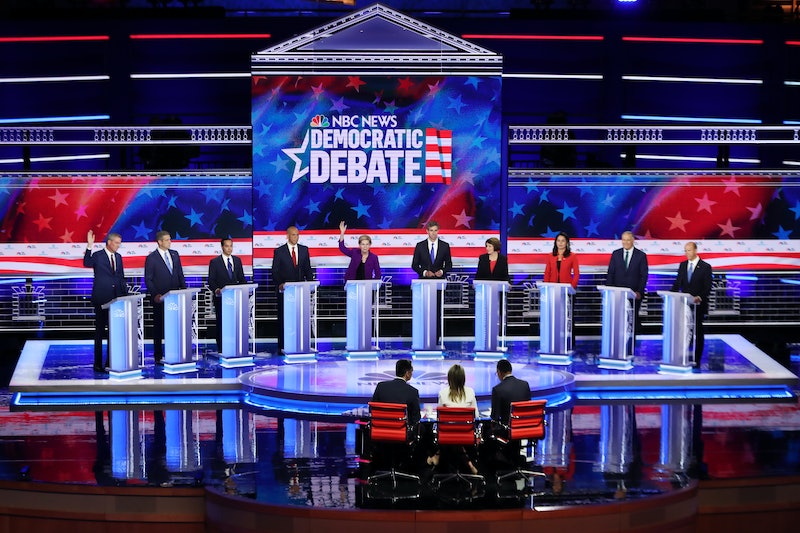 On Wednesday evening, ten Democratic presidential candidates took to the debate stage to share their vision for America's future. With so many candidates participating in the event, contenders had to vie for speaking time — and it wasn't easy. When looking at who spoke the most during the Democratic debate, a few candidates clearly dominated the conversation.

UPDATE: Ten more Democratic candidates took to the debate stage Thursday, June 27, and this post has been updated to include who got the most speaking time during that second debate.

As FiveThirtyEight revealed after analyzing a debate transcript from ABC News, the three candidates who spoke the most (as measured by words spoken) include Cory Booker (2,181 words), Beto O'Rourke (1,932), and Elizabeth Warren (1,637). When evaluating top speakers based on total minutes spoken during the debate, the findings are the same. As the New York Times noted, Booker spoke for 11 minutes and six seconds, O'Rourke for 10 minutes and 33 seconds, and Warren for nine minutes and 31 seconds.

On the second night of the Democratic debates, three of the most popular candidates — per the latest national polling averages cited by The New York Times — also happened to be the three candidates who spoke the most (as measured by speaking times). According to CNN, these candidates were former Vice President Joe Biden (13 minutes and 18 seconds), California Sen. Kamala Harris (12 minutes and 9 seconds), and Vermont Sen. Bernie Sanders (10 minutes and 53 seconds). Biden and Harris' higher speaking times could be attributed to a heated exchange between the two regarding race, school segregation, and busing.

These speaking times contrast quite significantly with those of the candidates who spoke the least. The New York Times indicated that Jay Inslee was the least loquacious during the first debate, speaking for a total of only five minutes and five seconds. He was followed by Bill de Blasio at five minutes and 54 seconds, Tulsi Gabbard at six minutes and 39 seconds, and John Delaney at six minutes and 45 seconds. Notably, according to FiveThirtyEight's analysis, Gabbard actually spoke more words than Delaney, so they swap places if you're evaluating speaking time by word count.

During the second debate, meanwhile, CNN found that author Marianne Williamson, California Rep. Eric Swalwell, and former tech executive Andrew Yang were among the candidates who spoke for the least amount of time. Williamson spoke for 4 minutes and 52 seconds, with Swalwell trailing just behind her at 4 minutes and 47 seconds. Yang, meanwhile, spoke for the smallest amount of time out of all 20 candidates who participated during the debates, at a mere 2 minutes and 56 seconds.

In addition to evaluating speaking times, some media outlets also took note of how many times each candidate mentioned President Trump during the debate. As NBC News reported, the top three candidates to refer to Trump by name or title were Klobuchar (she mentioned Trump nine times), Ryan (seven times), and Booker (four times). In contrast, neither Warren nor de Blasio ever mentioned Trump at all.

Of course, Wednesday's debate only represented the first debate in a two-part series. Ten other candidates will take the stage this evening to discuss their policy platforms and to try to stand out from each other. You can bet that each candidate's speaking time will be similarly tracked by news outlets this evening — and they will be compared both to each other and to contenders from Wednesday night's event.

Madhuri Sathish contributed to this report.