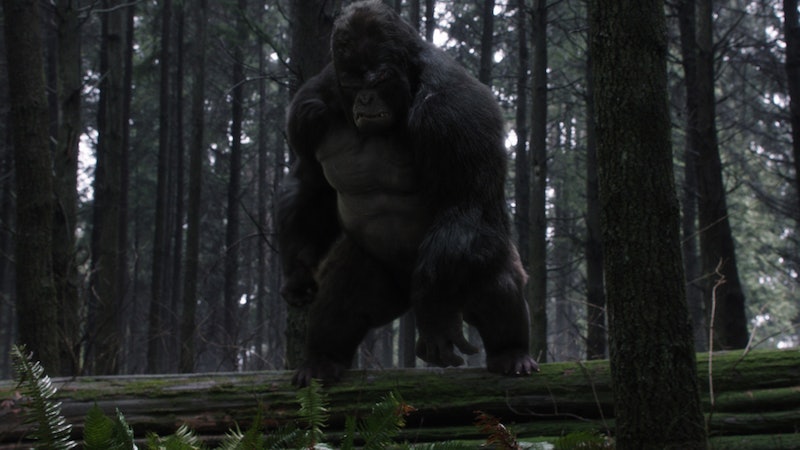 To rescue Harrison Wells, Jesse Quick is taking Team Flash to Earth-2 in the Feb. 21 episode, "Attack on Gorilla City." There, the crew will be reunited with former villain and sentient ape Gorilla Grodd on The Flash. With a whole episode set in his domain, viewers will be getting to know the series' biggest character (in size, at least) better than ever before, so now is a great time to also get to know the actor who voices Grodd, David Sobolov.

In the voiceover world, Sobolov is pretty prolific, with dozens of credits to his name in everything from TV to cartoons to video games. While you probably won't recognize his face, he's actually brought several big comic book characters to life is various forms. Voice acting isn't as easy as it seems — look at the mid-2000s trend of asking pretty much every celebrity to do a voice in an animated kids' movie for plenty of proof — and the skills of someone like Sobolov are often overlooked because you can't physically see everything he puts into a role. So, this Grodd-focused episode of The Flash should put his skills on display, and, if you're curious about more things he's done, here are a few of Sobolov's career highlights.

Since the 2014 film adaptation of Marvel's Guardians of the Galaxy, the team of lesser-known heroes have become huge stars. You may remember Drax the Destroyer, the hyper-literal member of the team. In the film, Drax was played by former wrestler Dave Bautista, but in pretty much every non-live action version of the character, he's voiced by Sobolov.

He Was In Another Nostalgic Property

Sobolov plays Shockwave in Transformers Prime, bringing a new take to this classic Decepticon character. Usually, Sobolov plays tough guys, but in this case, he's a combination of tough and an evil genius. And that's not even his only Transformers role — he also voiced Depth Charge on Beast Wars.

He Wrote & Directed His Own Short Film

In addition to the many voiceover performances he's given over the years, Sobolov tried his hand at creating his own short film in 2014. The Dentros is a psychological horror short about a man attempting to hide a recently discovered family secret.

In an interview with Geeks WorldWide, Sobolov talked about his past as a student of famous acting teacher Sanford Meisner. He told the website:

"There’s a phrase that he would use which was 'Acting is living truthfully under given imaginary circumstances.' So you can’t get circumstances more imaginary than video games, animation and The Flash. You are living these crazy circumstances but trying to make them real and that really is the key. It’s much more interesting to watch anything where it’s just a voice that’s animated if what they’re doing has a basis in reality instead of just putting on a voice."

You've Probably Played Games With Him Before

Because of the sheer number of characters in any given video game, there are dozens of performers who are brought in to do voiceovers and, sometimes, motion capture for the many different scenarios that create a fully fleshed-out world. One of Sobolov's biggest video game roles is Lieutenant Vasquez in Call of Duty: Modern Warfare.

He Has Even Appeared On Camera

While Sobolov's major talents are undoubtedly his vocal skills, he has appeared in a live action role. He played Jason Driver in Sparks in 2013, which was, ironically, another superhero movie. And he may be gearing up for another live action part, based on a photo Sobolov posted on Twitter of himself wearing some special effects makeup. Even though the film is live action, it's stylized to almost look like it's been animated.

Sobolov is clearly adept at projects that take advantage of his voiceover expertise, so Gorilla Grodd should really stand out in the rest of The Flash's Earth-2 arc and any future episodes that feature the character.

More like this
Everything To Know About The Musical 'Joker' Sequel – & Lady Gaga’s Role
By El Hunt and Sam Ramsden
Stephen Graham’s Wife Plays A Vital Role In His Career
By Emma Madden and Sophie McEvoy
Jennifer Coolidge Needs 'Legally Blonde 3' To Happen So She Stops Getting Hot Dog Jokes
By Jake Viswanath
Does 'Locke & Key’s Ending Mean There Could Be A Season 4?
By Sophia Moore
Get Even More From Bustle — Sign Up For The Newsletter