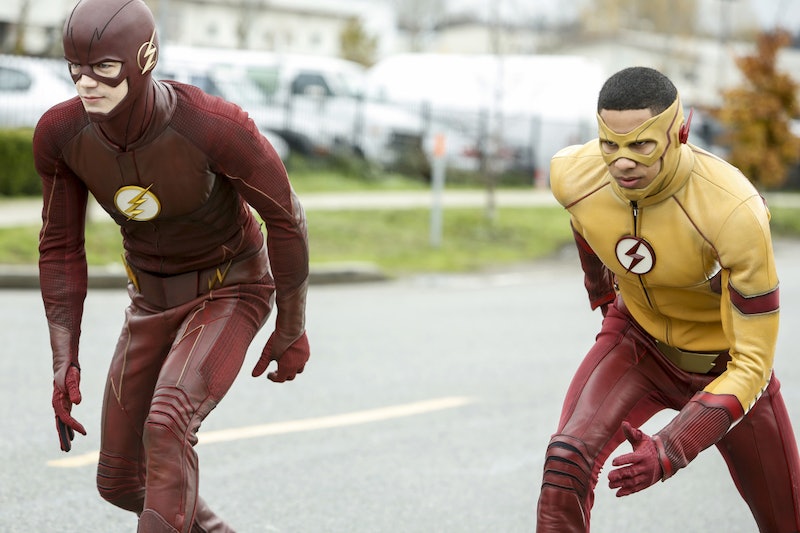 After a long day of saving Iris from a new metahuman, telling Joe about Iris' future death, and teaching Wally to phase on The Flash's "Untouchable," Team Flash probably hoped they could just curl up and go home. Unfortunately, as Wally was practicing phasing, the breach into other Earths opened and Jesse Quick returned to Star Labs in a rush. Her father, Harry (aka the nice Harrison Wells from Earth-2), was captured by Gorilla Grodd and she needs their help. It looks like Team Flash is headed to Gorilla City on The Flash, so fans better hold onto your hats.

Flash fans will remember Gorilla Grodd as the massive gorilla the first (and evil) Harrison Wells created. Grodd has wreaked havoc on Central City a few times in the past, and his psychic connection makes him especially difficult to beat. The last time Barry faced off with Grodd, he sent him through a breach and into Gorilla City, a home for gorillas on Earth-2. It's unclear what exactly caused Grodd to kidnap Harry, though it might have something to do with Grodd's intense psychic bond with the first Harrison Wells, who was like a father to him. Perhaps Grodd wants revenge on Harry for pretending to be the evil Harrison Wells the last time they met (in Season 2).

Grodd could also be using Harry as a bargaining chip to get close to Caitlin. Before the team sent Grodd to Gorilla City, Grodd bonded with Caitlin, and maybe now he wants her back. Whatever he's after, Barry, Cisco, Caitlin, and Wally aren't going to let Grodd take Harry without a fight. And so, next week, it's off to Gorilla City on Earth-2.

It's crucial, however, that Barry remembers that one of the news headlines Barry saw in the future when Savitar killed Iris was about Central City recovering from a gorilla attack. If Grodd or any of his new gorilla friends end up finding a way into Central City with Team Flash, it could bring that future closer to manifesting.