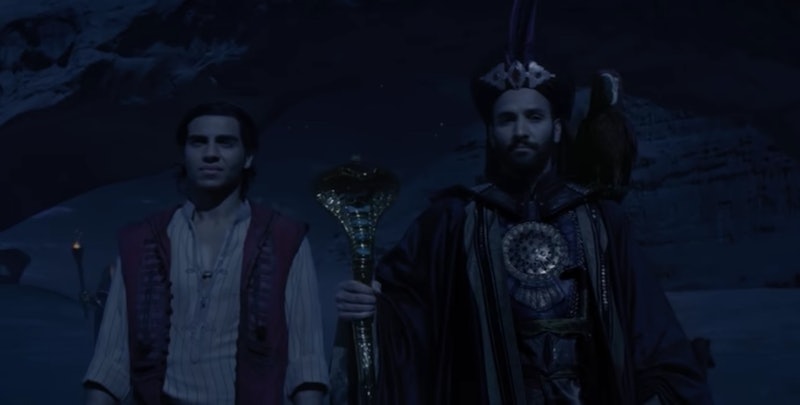 Both the live-action Cinderella and Tim Burton's reimagining of Dumbo muted critters who could talk in the animated versions, but the new Aladdin, out May 24, is going a different route. Abu, Rajah, and Iago are all present and accounted for in the movie's trailers. And while nobody expects Jasmine's loyal tiger or Aladdin's monkey best friend to do any talking, the wise-cracking parrot's aggressively sarcastic voice is an integral part of the original story's comedy and charm. Fortunately, we know that he will be heard in the new version. The voice of Iago in the new Aladdin isn't the same one you hear every time you rewatch the animated original, however.

In the 1992 movie and all of its sequels, the chatty Iago was voiced by comedian Gilbert Gottfried. And while all of the animals (and the magic carpet) have personality, Iago arguably has the biggest of them all. Jafar's boisterous, quick-witted, and opinionated sidekick behaves himself in public, leading the Sultan to believe that he's your typical "Polly want a cracker" bird. But behind closed doors he laughs maniacally with Jafar, helps him come up with evil schemes, and even has the uncanny ability to imitate Princess Jasmine's voice — a skill which he uses to fool Aladdin near the end of the movie.

The Hollywood Reporter broke the news in March of this year that Iago would be voiced by Alan Tudyk, not Gottfried, in the upcoming film. The Firefly actor also voiced the chicken Heihei in Moana, King Candy in Wreck-It Ralph, Alistair Krei in Big Hero 6, and K-2SO in Rogue One. He confirmed the news on his official Twitter account, writing, "Same studio, different bird," referring back to his Moana part. Gottfried told TMZ that he wasn't invited to be a part of the movie.

What's not clear right now is whether Iago will have the same — or indeed any — actual lines. Tudyk is a seasoned voice actor, and it would be a waste of talent just to have him caw in the recording booth. (Though, as we saw with Heihei, he can craft quite a performance out of just that.) But there's still no telling exactly how much talking Iago will do. Will he be coming up with brilliantly evil ideas to whisper in Jafar's (Marwan Kenzari) ear? Will he laugh? Crack jokes and make bad puns? Can he mockingly mimic any person's voice? Will he be angrily shoving crackers into the Sultan's mouth?

What we do know for sure from the trailer is that the bird will be doing much more than perching on Jafar's shoulder and talking his master's ear off. Towards the end of the movie, Iago will be transforming into a frighteningly gigantic bird, hovering over Agrabah and chasing Aladdin who's zooming through the city on the magic carpet.

If you're hesitant because you're loyal to the 1992 version of Jafar's angry minion, who knows? You might just find yourself delightfully surprised by this new iteration of the character.