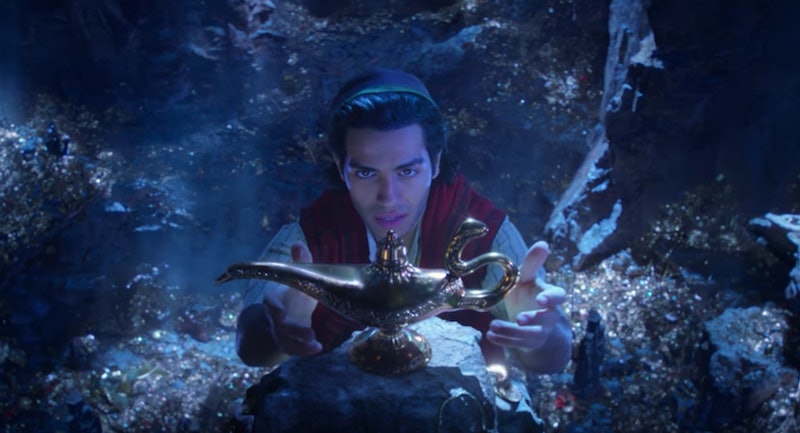 Get ready to return to the magical streets of Agrabah, ladies and gentlemen, because Disney just dropped the first live action Aladdin trailer, and, while it doesn't show much, it still looks pretty magical. The teaser trailer, released late on Thursday, Oct. 11, is just a little over one minute long, but that's long enough to give fans their first look at the titular street rat, Aladdin himself.

Aladdin only appears briefly at the tail end of the trailer, after viewers are treated to some impressive arial shots of the desert of Agrabah, where four camels can be seen wondering, and a parrot, likely Iago, Jafar's loyal pet, flying in the sky. The viewers are also treated to a view of what looks like the sultan's palace, as a slowed down, haunting arrangement of "Arabian Nights" plays in the background, before the camera follows Iago into the night's sky and down through the lion's mouth, into the Cave of Wonders. It is there, among the mountains of jewels and gold that fans finally get a glimpse of Aladdin, reaching for the magic lamp. Unfortunately, the teaser trailer stops there, so fans will have to wait for Disney to release a longer trailer before they can really get a chance to see what Jasmine, Jafar, and Genie, will look like IRL.

Played by Mena Massoud, this Aladdin looks a little bit different from the animated character we've all come to know and love. For one thing: he's wearing a shirt under his vest — something animated Aladdin never did. He also appears to be wearing red, a contrast to animated Aladdin's bright purple top. What doesn't appear to have changed is his daring spirit and luscious hair (hey, some things are sacred).

Of course, Aladdin's outfit won't be the only thing to change in this new adaptation of the Disney animated classic. The other major change will be the Genie, famously voiced by the iconic comedian Robin Williams in the 1992 film. He will be played in this live action version by Will Smith. One day before the teaser trailer's release, Smith took to Instagram to debut Aladdin's first official poster — an image of the magic lamp; surrounded by purple lighting with the tagline "Choose wisely." Though fans will have to wait to see Smith's version of the magical guide, the actor hinted in his caption that his Genie would still have the signature blue hue of the animated version. "LEMME OUT!! Can't wait for y'all to see Me BLUE :-) #aladdin," he wrote.

Aladdin's third main character, Jasmine, will also be a bit different in the live action version than she was in the animated film. This time around, Disney is adding a few original songs to the soundtrack, including a new song just for Jasmine, as reported by Variety. Actor Naomi Scott also teased that Jasmine would be a bit more well rounded. "She's a multidimensional woman, and she doesn't have to be just one thing," Scott said in an interview with The Hollywood Reporter in November of 2017. "So in this movie, you see her go on such a roller coaster, as opposed to her one goal to fall in love or get married." Moreover, Jasmine will no longer be the only female character. This time, she'll be joined by Dalia, a handmaiden played by Nasim Pedrad. But, it looks like fans will have to wait until we're a little closer to Aladdin's May 24, 2019, release date before they get a glimpse of any new characters.

Even with all these changes, if the final movie is anything like the trailer, then it will definitely still have the same spirit (and Cave of Wonders) that fans loved about the original. Now, if only Disney would give us a bit more of Agrabah's "unbelievable sights" to look at.