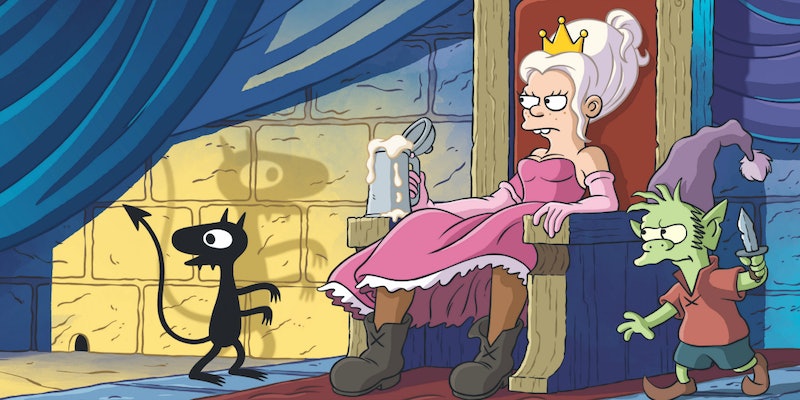 Matt Groening's new animated series, Disenchantment, strives to satirize the fantasy genre in the same manner that his Futurama did science-fiction. The first season premieres in full on Netflix on Aug. 17, and fans of comedy may recognize the voice of the evil Luci from some other offbeat TV projects. Eric Andre plays Luci on Disenchantment, and demon or not, Luci may be one of the actor's most relatable roles.

For those who aren't yet familiar with him, Andre is a comedian best known for being the host of Adult Swim's The Eric Andre Show in addition to having major roles in the comedy series Man Seeking Woman and Don't Trust The B**** In Apartment 23. Andre has made a career out of being fearless in his approach to comedy, which itself can best be described as abrasive, surreal, and grotesque. Even if you haven't seen the Eric Andre Show, chances are you've seen memes inspired by the absurd program.

While Luci has his fair share of demented ideas — including wanting to "get rid of all the diseases plaguing mankind and replace them with worse ones," he's far more tame than the person that Eric Andre becomes when he's hosting the show that bears his name. Fans of Disenchantment who want to hear more from the cult comedian have plenty of content to dig into. Here's where else you can find him:

Andre spent three seasons playing Mike on the FXX series Man Seeking Woman, which combined the genre of romantic comedy with the medium of sketch comedy. The show takes the peaks and valleys of love and relationships and twists them into truly surreal situations. In the show's first season, a character discovers their ex-girlfriend's new boyfriend is literally Hitler and assembles a room of military experts to craft the perfect text message, with things only getting stranger from there.

Don't Trust The B***** In Apartment 23 was sadly short-lived, getting cancelled after only 2 seasons, but it assembled a truly impressive roster of talent. The show starred a post-Breaking Bad but pre-Jessica Jones Krysten Ritter as the titular B, and James Van Der Beek playing himself in an extraordinarily meta turn. The show was also many people's first introduction to Andre, who played coffee shop manager Mark for the duration of the series.

The Eric Andre Show is pure chaos, and seems akin to what would happen if someone had a nightmare that took on the structure of a late night talk show. One moment Eric Andre could be interviewing Chance The Rapper while submerged in a giant coffee cup, another he's trying to hide other people in a trenchcoat to become the tallest person to buy a vehicle, all before closing the show with sidekick Hannibal Buress performing a rap while dressed as Morpheus from The Matrix franchise.

The Disenchantment star embraces the absurd and creates comedy out of uncomfortable moments, which makes him a perfect fit for the Netflix series' demonic companion. While Luci is certainly twisted, it's hard to imagine that he's any more twisted than Eric Andre's past roles.