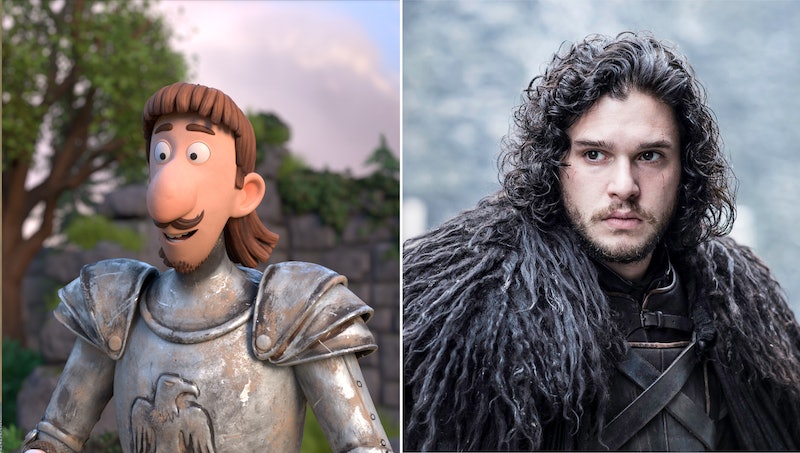 With the prospect of presents, a morning (or day) spent in your pjs, and hot chocolate before 9 a.m. it is tough not to revert back to childhood on Christmas morning. I wait 364 days of the year for the one afternoon where it is acceptable to laze around, eating chocolate, watching films so any family festive treat is much welcomed. On this Dec. 25 the creators of The Gruffalo are bringing a much loved children’s story by Axel Scheffler and Julia Donaldson to life. But who voices Sir Gadabout in Zog? The super sweet tale of a dragon who just wants to impress will be told by an A-list cast and there is no doubt that you will recognise the knight in this story. It isn’t the first time he has played a character clad in a suit of armour.

Whilst you may be more accustomed to seeing him fight dragons than aiding them, Sir Gadabout is being voiced by none other than Game of Thrones royalty Kit Harington. Swapping the deep winter of Westeros for something a little lighter Harington will star alongside Lenny Henry, Hugh Skinner, and Patsy Ferran in the BBC One animation that teaches you to defy all expectations. Whilst Sir Gadabout first comes onto our screens as the fierce knight keen to rescue Princess Pearl from the clasps of well meaning, clumsy dragon Zog once she reveals her true ambitions to become a doctor he gives up his rescue mission in order to join her. This film is seriously cute, and with a strong female lead like Princess Pearl it can’t be missed.

Perhaps best known for his role in award winning Game of Thrones, Harington has spent the last seven years playing Jon Snow. But he is no stranger to the BBC either. In 2017 he starred in the BBC One series, Gunpowder as Robert Catesby. Working alongside fellow Hollywood legend Liv Tyler, Harington’s character Catesby joins the enigmatic group of disenchanted Catholics plotting to blow up the Houses of Parliament and kill King James. Speaking about his role in the mini-series, Harington said in a press release, “you may know the name Guy Fawkes — as it has been attached to all sorts of things, from Occupying Wall Street to V For Vendetta — but many won’t know the whole story. It goes far beyond the name Fawkes and examines many fascinating characters and their desperate, tragedy-strewn lives.”

A step away from the dark and dangerous roles we are more accustomed to seeing him play, Zog tells the story of a sweet young dragon (voiced by Hugh Skinner) hoping to win a gold star at Dragon School. While he is very keen, his plans don’t always come to fruition. To his luck Princess Pearl (voiced by Patsy Ferran), the girl he is tasked with capturing, already wants to escape the confines of her strict upbringing with her sight set on much bigger things. Sir Gadabout the Great comes on the scene when Zog is challenged to learn how to fight. Only Princess Pearl divulges her secret ambition to want to become a doctor and Gadabout decides to follow her. They even include Zog in their new adventure as their flying ambulance. This thirty minute film is so incredibly feel good I can hardly wait until Christmas Day afternoon.

Sir Lenny Henry narrates the story and in a press release he said, “it's wonderful to have voiced the narrator in Zog for this Christmas. The story has a lovely lyricism to it and it's been really good fun seeing the beautiful animation come together. There's a cast of brilliant actors and the story is silly, and outrageous, and surreal, and I like all of those things!"

Airing on BBC One at 4 p.m. on Dec. 25, Zog is going to be prime time Christmas TV. With an empowering message, A-list cast, and set of silly characters I can already see myself cuddled up on the sofa, in a Christmas dinner coma, laughing my way through it.