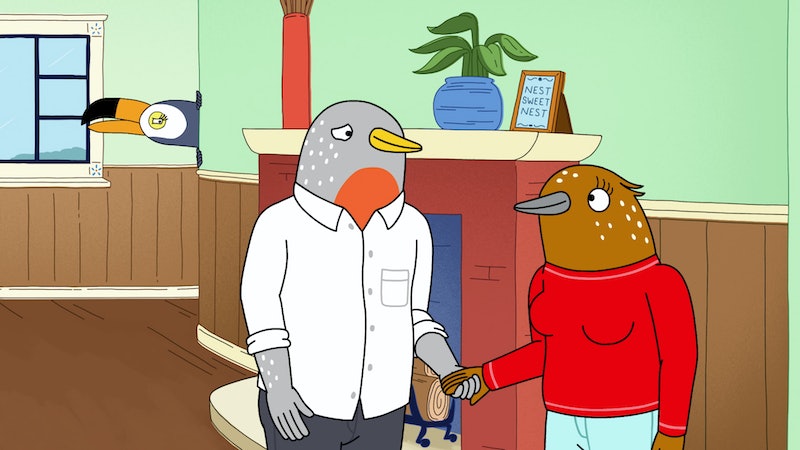 Netflix's new series Tuca & Bertie comes from Lisa Hanawalt, one of the creative minds behind BoJack Horseman, which explains why the two share a great deal in common. Both shows feature anthropomorphic animals, nuanced explorations of mental health, and diverse, talented case of characters. Steven Yeun, the voice of Speckle of Tuca & Bertie is known for playing a variety of supporting roles which makes the Walking Dead alum perfectly suited to play Bertie's supportive partner.

Speckle is Bertie's long-term boyfriend with whom she's recently moved in with at the start of the series. While the relationship between the titular pairing of Tuca (Tiffany Haddish) and Bertie (Ali Wong) is at the core of the show, Bertie's relationship with Speckle informs her own feelings towards her life. In an interview with Decider, Yeun gave some insight as to what fans can expect from their relationship, saying that Speckle is "just such a good dude and he’s trying really hard."

Yeun doesn't clarify what exactly requires Speckle to "try really hard," but if Bertie is anything like the title character of Hanawalt's other creation, Bojack Horseman, then Bertie probably has a lot going on under the surface that Speckle tries to help her deal with.

While Bertie and Speckle's relationship may be complicated, the actors have made it clear that in real life there's nothing but love between them. Yuen told Decider that, "Working with Ali, is of course, wonderful. She’s fantastic, and to be able to play her boyfriend in this is even more fun." The sentiment is shared by Wong, who posted on Instagram that it is "so great to finally work on a project with this talented and amazing person." She also shared an anecdote about getting a text from Yeun about being her boyfriend when he got the role, which also prompted some witty comments from users on Twitter.

Perhaps the most exciting element of Yuen's involvement with Tuca & Bertie is that it may introduce some fans of his live-action performances, seen in projects like Burning and Okja, to his extensive catalog of voiceover performance. This guy has a ton of experience in the recording room. He's played major recurring roles on Netflix's Voltron and Tales Of Arcadia series and will be playing the lead role in Amazon's animated superhero series Invincible.

Yeun told Decider that, "Animation is fun for me because I get to play characters I never would’ve been able to access before." But if anything, Speckle is one of the more conventional roles that Yeun has played recently. In 2019 alone, Yeun has played a dystopian upper-crust hipster in Weird City, a mysterious traveler with a dark secret in The Twilight Zone, and a man whose birthday party descends into fecal-based madness in I Think You Should Leave With Tim Robinson. Yeun is unafraid to take on new and challenging roles, but his performance in Tuca & Bertie shows he's still interested in playing ordinary people, as long as those people are birds.

More like this
'Friends' Creator Marta Kauffman Opened Up About Misgendering A Guest Character
By Grace Wehniainen
Who Is Liam Neeson's Character In The Obi-Wan Kenobi Finale?
By Kadin Burnett
Viktor Hargreeves’ Coming Out Scenes Are The Sweetest Part Of Umbrella Academy Season 3
By Gretchen Smail
Why Sadie Sink Is Hopeful Max Will Return In Stranger Things Season 5
By Brad Witter
Get Even More From Bustle — Sign Up For The Newsletter