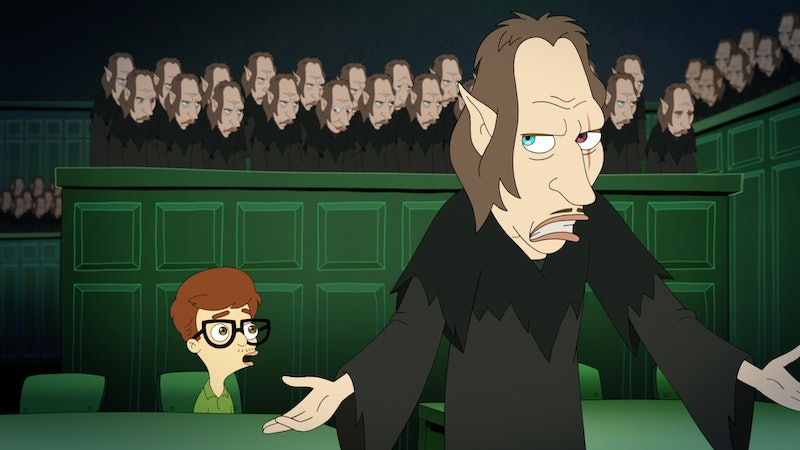 Big Mouth's first season saw middle school BFFs Andrew and Nick lose countless battles against The Hormone Monster — an imaginary, Bigfoot-like creature slowly turning them into sex-crazed teens. But, thankfully (or maybe not?) for them, it looks like he may have met his match. Season 2 introduces The Hormone Monster's mortal enemy, The Shame Wizard, voiced by David Thewlis — who you may or may not recognize from Harry Potter.

Back in the early 2000s, Thewlis played none other than Remus Lupin, once Professor of Defence Against The Dark Arts at the Hogwarts School of Witchcraft and Wizardry. His other recent roles include Wonder Woman and Fargo. And while he's lent his British accent to background characters of Family Guy in the past, based on his IMDb profile, Thewlis is known for his live action roles. So The Shame Wizard marks somewhat of a new turn in his career.

The pointy-eared, bulging-eyed character dons all black and is almost creepier than the VM Varga creature Thewlis portrayed in Fargo. According to Netflix, he "haunts the kids, stoking their deepest shames," and by the looks of it, his only mission is to demolish the little bit of self-esteem teenagers have by shaming them for their hormone-influenced, impulse-driven decisions. Considering the relatably uncertain, body image-focused conversations that take place in the season's trailer (i.e. Jessi's "Why is everybody so obsessed with boobs?" and "My mom says real beauty is on the inside."), there isn't much confidence within them to begin with, and the Wizard could rip any existing bit of it to shreds.

From what we know of him so far, The Shame Monster seems to most frequently visit Andrew, shaming him for his uncontrollable erections spurred by anything and everything. But he could very likely end up hovering over the shoulders of all of Andrew's friends — or perhaps, like The Hormone Monster's counterpart, The Hormone Monstress, The Shame Wizard could recruit an unapologetic Mrs. to haunt the middle school girls' dwindling self-esteems.

To make up for his apparent thievery of adolescent happiness, there is one known redeeming quality of The Shame Wizard (besides his jokes, of course). According to IndieWire, he joins the show's musical ranks with an original song, appropriately titled "The Shame Song."

“My favorite song I’ve written so far for the show is toward the end of Season 2, and it’s a song the Shame Wizard, voiced by David Thewlis, sings that’s sort of part menacing Disney song and part David Bowie, I guess,” composer Mark Rivers told the outlet. “It’s called ‘Shame’ or ‘The Shame Song.’ That’s my favorite song so far. It came together great, and he provided a great vocal for it. And the animation is fantastic, so look for that one!”

It's also possible that, despite his evil appearance, The Shame Wizard will have the kids' best interest in mind. He could act as a moral guidepost, reminding them that actions have consequence and teaching the importance of responsible decision-making — a fitting foil to The Hormone Monster's impulsive rages.

So who knows, maybe this wizard will turn out to be more Gryffindor than Syltherin.